The Different Types of Bamboo You May Have Never Heard About

Bamboo is the largest member of the grass family. Among the various types of bamboo, there are some that are gigantic and almost treelike, while dwarf varieties can be small enough to grow in containers. Here we discuss the scientific classification of bamboos, their growth pattern, preferred temperature zones, and utility in everyday life. 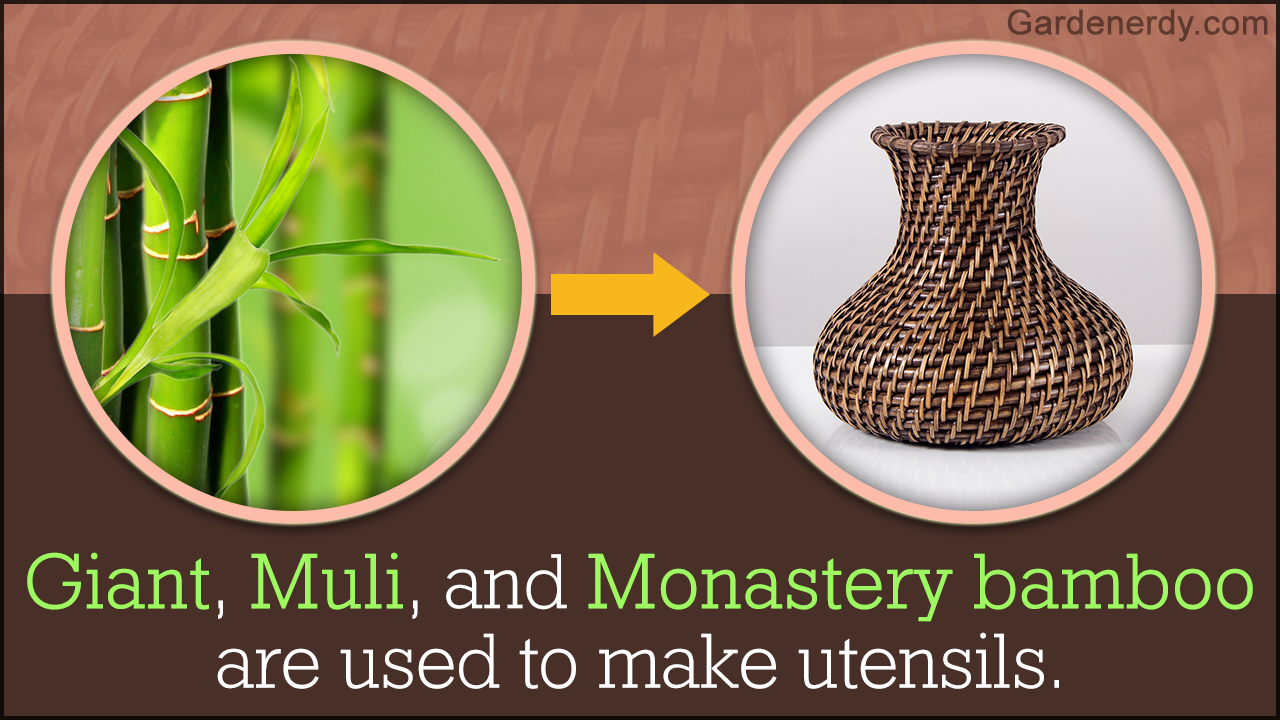 Bamboo is the largest member of the grass family. Among the various types of bamboo, there are some that are gigantic and almost treelike, while dwarf varieties can be small enough to grow in containers. Here we discuss the scientific classification of bamboos, their growth pattern, preferred temperature zones, and utility in everyday life.

Bamboo is the fastest growing plant on Earth and is capable of attaining its full height and spread within a single growing season. The growth aspect of bamboos can determine whether it is a clumping or running species. Bamboos are evergreen plants that belong to the Poaceae family of grass. This giant grass is hardy enough to sustain harsh winters, drought, as well as the sweltering humidity of tropical regions. There are more than 10 genera of bamboo that have been divided into 1,450 species.

Unlike grass, the stalk of the bamboo is often woody from the outside, has nodes and is fibrous from the inside. The leaves are narrow and slender and their length in most cases depends upon the size of the bamboo plant. In some variegated species the foliage and stems have different colors and patterns which help in differentiating one species from the other. Following information will clarify the differences between the types of bamboo and their growing habits and preferred habitat.

Parts of a Bamboo

Rhizome: The underground stem or rootstock of the bamboo is known as rhizome. These rhizomes develop culms and roots which grow sidewards.

Bud: The new shoot that develops on the rhizome.

Shoot: The new culm that emerges from the subterranean bud.

Culm: The bamboo stem found beneath the culm sheaths.

Culm Sheath: The protective layer of leaves found on new shoots and culms. The sheaths fall off once the culm has developed its woody outer timber and attained its mature height.

Node: The rings of the bamboo stem found under the culms. The node is the septum or diaphragm that divides the hollow stem of the bamboo.

Internode: The part of the stem that is hollow and displays various colors and patterns according to varying species of bamboo.

Just as the name suggests, running bamboos are fast-growing species that spread rapidly and cover vast amount of ground, thereby making them invasive in nature. Since monopodial or running bamboos are found in colder zones, these bamboos have rhizomes that grow horizontally and spread extensively in search of moisture and sunlight. The stems of a running bamboo grows in an invasive manner and can grow away from its mother or domain bamboo. Such bamboos can cover more than 15 feet of ground within a year and are capable of producing several culms on a single rhizome. The growth of these bamboos can be contained by ripping the roots after every few meters, so as to thwart the rhizomes from producing any more culms.

Clumping bamboos are slow-growing species that grow in large U-shaped clusters or clumps of culms. This type of bamboo is non-invasive because each rhizome produces only a single culm. Unlike running bamboos, the rhizomes are self-containing and sprout near the parent plant. New shoots appear from the ground in summer and grow rapidly from thereon. Clumping bamboos consist of both giant as well as dwarf species thereby making them ideal for urban settings. Even though this type of bamboo thrives in warm tropical climates, it can also be found in colder areas that experience frost.

Bambusoideae is classified as a subfamily of the grass family of Poaceae and consists of two main groups, which are:

Oryzodae: These are herbaceous or non-woody grass. Oryzodae are not considered as true bamboos because unlike bamboo, these type of grass do not have indeterminate inflorescence, six stamens and three stigmas, culms or nodes. The Oryzodae group comprise 13 tribes which are as follows:

Bambusodae: The supertribe Bambusodae includes the tribe Bambuseae. This tribe comprises approximately 1000 identified bamboo species and 91 genera. The genera of the Bambuseae tribe includes only woody bamboos which are further divided into 9 subtribes. The subtribes of bambuseae are as follows:

Temperate bamboos are cold hardy and can tolerate temperatures below 20° Fahrenheit. These type of bamboos grow in USDA zones of 5-8 and are native to Madagascar, Africa, Sri Lanka, Southern India, and South-East Asia. The two subtribes belonging to temperate bamboos are:

The 460 species of paleotropical bamboos are scattered throughout Asia, India, Sri Lanka, Africa, Australia, and Madagascar. The four subtribes belonging to paleotropical woody bamboos are:

Popular Types of Bamboos and Their Uses

The pliability of bamboo makes it a suitable material for constructing bridges, houses, and for using as scaffolding. In Philippine, nipa houses are made entirely of bamboo and can withstand moisture and heat. Bamboo planks are also compressed and treated for making flooring, walls, and ceilings for houses. The biggest advantage of using bamboo timber is that, it can be cut without killing the plant. This unique aspect of the bamboo has made it an extremely popular choice among eco-conscious individuals. Some of the commonly used timbered bamboo species have been listed below.

Guadua angustifolia is believed to be the strongest bamboo in the world.

Bamboo being a timbered grass, grows rapidly and is thus available in plenty for commercial use. The popularity of exotic bamboo furniture increased during the 18th and 19th century, when Western countries began ordering for custom-made designs. Bamboo flooring on the other hand has gained popularity very recently and is being hailed as the long-term replacement for hardwood floors. Processed bamboo is not only sturdy, it is also resilient to moisture, heat, and pests. Following are some bamboo species that are used for making furniture and flooring.

Fresh bamboo is dried in a mold or bent using heat to make furniture.

Bamboo shoots are a staple food throughout Asia and are extremely nutritious. Almost all types of bamboos can be consumed, however, some are preferred over others for their flavor and size. Bamboo shoots must be harvested as soon as they are a foot tall. Since some shoots contain cyanide, the shoots must be boiled and leached before consumption. Once the shoots have been boiled, they can be stored for two weeks if they are soaked in cold water and kept in the fridge. The water must be replaced everyday in order to remove toxins and keep the shoots from rotting. While cooking bamboo, the shoots must be boiled for 30-45 minutes so as to remove their bitter taste. The boiled water must not be used for cooking and should be drained. Some delicious edible bamboo species have been listed below.

Bambusa oldhamii shoots are large, tender, and flavorful. These shoots are also canned and sold commercially.

The Thai sweet rice or khao lam is cooked and served in bamboo.

The bamboo plant has been used for making musical instruments since centuries. Instruments such as pan flutes, rainmakers, Australian didgeridoo, Korean Danso and Dangjeok, Indian flute or bansuri, Japanese Komabue, shakuhachi, and Kagurabue are predominantly made of bamboo. Hollow bamboo species with thin culms are chosen for the purpose of making musical wind instruments. The girth and hollow of the bamboo internode helps in determining the scale of the instruments. The following are some of the popular types of cane-like bamboos used for making these musical instruments.

A dwarf cultivar of bamboo being grown indoors.

Cotton is gradually being replaced by bamboo for making fabric, however much remains to be done in order to bring bamboo fabric into the mainstream market. Currently, processing bamboo into fabric is expensive and uses harsh solvents. Bambusa textilis is often used for making textile because its leaves and the pith from its thin-walled culms are easier to mash. The resulting threadlike pulp is used for weaving. Following types of bamboos are often used for making fabric.

Bamboo yarn is blended with cotton, hemp, or spandex to make fabric of varied texture.

A bamboo plant usually flowers after having reached the end of its life and will die soon after. Nonetheless, some types of bamboo flower annually and do not self-destruct like others.

The fruits produced by bamboos are edible as well and are relished by humans as well as animals. Therefore, since every part of the bamboo can be used for something or the other, it is one of the most giving plants on Earth. 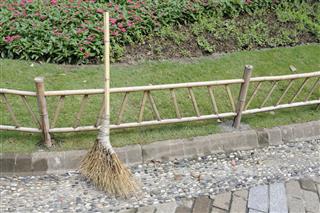 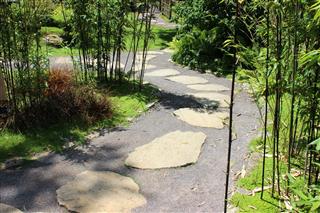 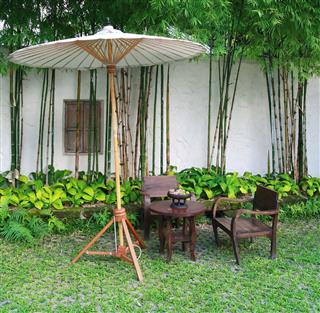 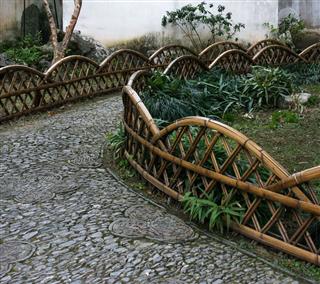 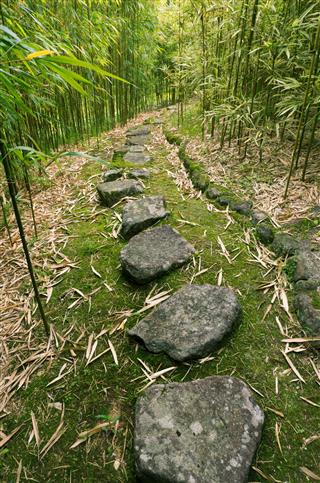 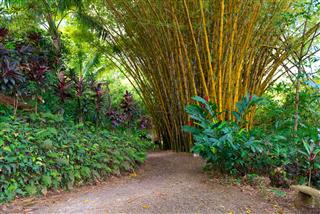