Polyculture farming is proving to be one of the most efficient methods of farming. More and more people are considering it to utilize their resources in a better way. Read this Gardenerdy post to know more about the advantages and disadvantages of polyculture farming. 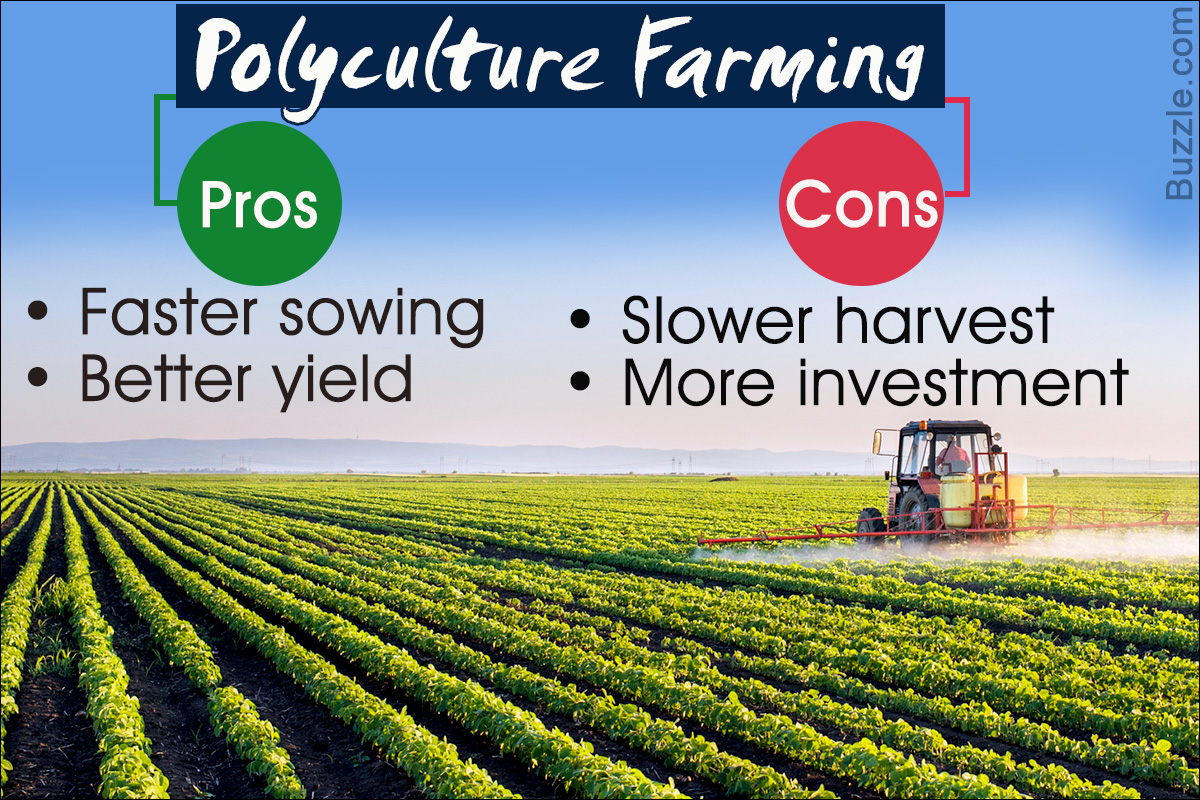 Polyculture farming is proving to be one of the most efficient methods of farming. More and more people are considering it to utilize their resources in a better way. Read this Gardenerdy post to know more about the advantages and disadvantages of polyculture farming.

Studies show that three crops if planted together, can yield more varied nutritive contents and also reduce weeds and pests.

Polyculture farming is an agricultural method of planting multiple crops in the same field.

The farmer replicates the natural conditions of an ecosystem for plants or animals, which also involves fish farming. They have certain requirements just as human beings do. One single land is dedicated to multiple plants or animals in polyculture farming. The most popular method of this type of farming is done by growing a mixture of perennial plants, which in turn can be used as a source of food for animals and humans. In polyculture farming, crops are produced by using different methods and practices such as crop rotation, intercropping, alley cropping, multiple cropping, and companion planting.

For example, in monoculture farming, corn will only grow with corn crops, and tomato with only tomato crop. In polyculture farming, if you grow cabbage, beans, and lettuce together, the beans help in replenishing the nitrogen in the soil that gets drained out from other plants. When lettuce and cabbage are fully grown, they harvest off the leaves of any individual plant that gives more room for other plants to grow. It has some of its own added benefits than monoculture farming, in which only one type of crop is grown. However, with advantages come the disadvantages too.

Advantages and Disadvantages of Polyculture Farming

► Unlike monoculture farming, one piece of land is devoted to more than one crop in polyculture farming. In monoculture, a farmer would need a large amount of land to segregate the crops, which in turn would need a complex irrigation system, , thus being time-consuming for the farmer. However, with polyculture, a farmer can have the same yield of crops and a more efficient irrigation system on a smaller piece of land.

► It reduces the number of pests, weeds, and disease outbreaks because of increased variety of plants. Studies in China show that planting different varieties of rice in the same field increased the yield by 89% because of a drastic decrease in the number of diseases.

► Different shapes and sizes of the plant roots make good and full use of the soil and increase the soil fertility as compared to that in a monoculture field.

► Polyculture farming results in a more stable and consistent income for the farmers as they don’t have to depend on just one type of production. Having more and varied types of production will act as a cushion during the impact of low production days or low prices.

► The plants that grow near to other plants have a greater and stronger immunity, and fight off the bacteria faster than the plants in monoculture fields.

► Because more than one type of plant is produced in a farm, it becomes difficult for the farmers to control and supervise the activities going on in the farm. They have to take care of the needs of each and every plant.

► The farmers have to be more and more knowledgeable about their plants if they are planting diverse crops. This also includes the planning of polyculture well in advance, which can be really time-consuming.

► Planning and planting a polyculture garden or a field can be a laborious task.

► Polyculture farming might result in higher investment in specific equipment initially to cater to the needs to every plant species. It will need greater infrastructure to get the work done on a land for polyculture farming.

Integrated fish farming is a process of producing fish along with other farm products and livestock that is centered around the fish farm. You can grow multiple crops in integration with fish farm, and have vegetables, crops, livestock, and fish growing in the same area so as to increase the production. It also ensures maximum utilization of land and water resources, resulting in diverse outputs with little costs.

In a proper polyculture integrated fish farming, you can have all the subsystem of agriculture growing around the fish pond. With a combination of livestock, integrated fish, and crops, the waste products and excreta from animals can be used as manure and feed for the plants, and the dried plants or weeds can used as food for the animals. The excreta of fish and animals is a good source of ammonia and nitrogen, which serves as a high-quality fertilizer for the plants. Water and silt at the bottom of the fish pond can be used as a fertilizer for irrigation purposes. Thus, polyculture integrated fish farming results in lower production costs and less wastage of resources.

Therefore, polyculture farming is a more efficient, economical, and practical approach towards farming. You can have all your crops in the same field that help in gaining profit economically as well as in maintaining the ecological balance.