“Leaflets three; let it be.”

This cautionary rhyme holds true for identifying poison oak and poison ivy leaves most of the time. Examining the characteristic 3-leaf cluster is the easiest way to determine the identity of these plants.

Itchy rashes and blisters―these three plants have the potential to wreak havoc on an innocent camping trip or even a routine trek through the hills. Poison ivy, poison oak, and sumac contain urushiol, an oily secretion which can trigger a rash in humans who come in contact with any part of the plant. An allergic reaction can occur by touching the plant directly, or by coming into contact with the oil residue on animals, clothing, footwear, or other items.

Every person’s susceptibility to these plants varies―some are not sensitive at the outset, but may become so after constant exposure. Symptoms usually appear within 8 – 48 hours and are known to last for weeks. Itching and burning of the skin may be followed by a rash, redness, swelling, and watery blisters. The rash, which can last 2 – 5 weeks, is not contagious and will not spread. There are times when complications can occur if the blisters become infected.

The only way to be safe is to learn how to identify these trees in order to avoid contact. It is said that understanding the shape of their leaves is the best way to differentiate between the three. We’ve featured pictures and identification details below.

Fuzzy green leaves in clusters of three are lobed or with rounded edges.

Poison oak can be found as a low shrub, about 3 feet tall, in the eastern and southern United States, and in tall clumps or long vines on the Pacific Coast.

A poison oak leaf comprises three leaflets, with the stem attached to the terminal leaflet being longer than the stems holding the remaining two. A distinguishing factor of poison oak is its marked similarity to an oak leaf, especially regarding the rounded edges; although the poison oak’s leaves are remarkably glossier. The terminal leaflet is usually lobed uniformly on both margins, whereas the two lateral leaflets are often irregularly lobed. Leaf sizes may vary, but are known to be about 3 – 4 inches long. Another notable feature is that the stems and leaflets have a fuzzy texture.

Leaflets emerge with a reddish tinge in the spring, turn green, and then assume varying shades of yellow and red in the fall before dropping. You may also spot small white flowers along with ripened fruit that is round and light brown in color.

The leaves and stems are smooth with no layer of hair covering them.

Poison ivy is found all across the United States, with the exception of Hawaii and Alaska. Just like the poison oak, this tree is also identified with its characteristic 3-leaf cluster. The plant is either a woody shrub, growing up to 5-feet tall, or a vine up to 150-feet tall, which can be seen on trees, walls, and fences, or at times even along the ground.

Leaflets appear in clusters of 3, and have slightly serrated or almost smooth edges, which differentiates it from poison oak. Also, the leaves and stems are smooth, with no layer of hair covering them. Leaves sprout with a shiny reddish tinge in the spring, before taking on a shade of dull green as they age, eventually turning into shades of red or purple before they wilt.

Compound leaf with a red-colored stem.

Poison sumac is a shrub or small tree, growing up to nearly 30 feet, and is mainly found in eastern United States.

The leaf of the poison sumac is a compound leaf, comprising 7 – 13 leaflets, with each leaf being 2 – 3 inches long. They are oblong-shaped and taper to a sharp tip. The edges are slightly serrated, with the texture of the leaf being velvety smooth. The stem is usually red in color. In springtime, the leaves burst to life in a shade of vivid orange, going on to become dark green, and finally, a shade of orange-red in fall.

Flowers may appear in small clusters, and are yellow in color. They mature into fruit, looking similar to those of the poison ivy and poison oak.

Being able to identify these poisonous plants will go a long way in avoiding any accidental contact. As of now, there are no preventive measures (vaccines) that can be taken to resist the effects of these plants. 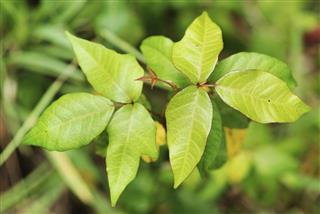 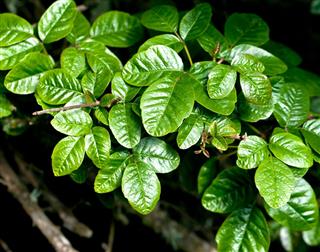