The strange appearance of the 'bleeding tooth fungus' has earned the species several descriptive vernacular names like the 'devil's tooth' and the 'red-juice tooth'. Gardenerdy brings you some interesting facts about this scary-looking mushroom. 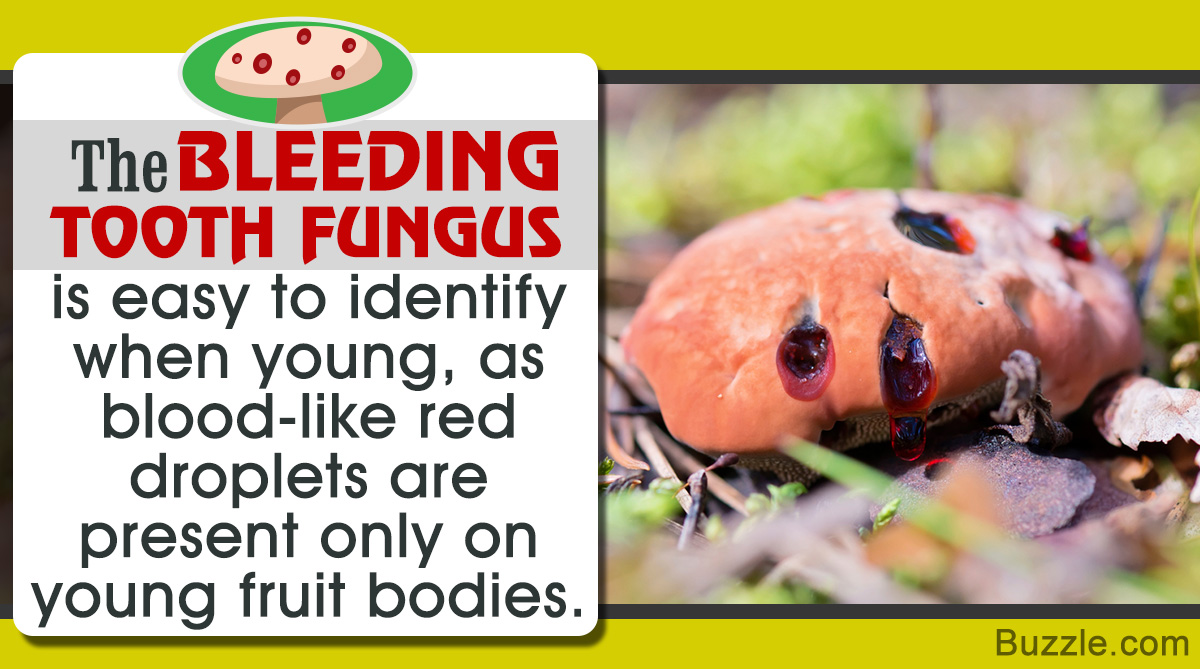 The strange appearance of the ‘bleeding tooth fungus’ has earned the species several descriptive vernacular names like the ‘devil’s tooth’ and the ‘red-juice tooth’. Gardenerdy brings you some interesting facts about this scary-looking mushroom.

The ruby-red fluid that oozes through small pores of Hydnellum peckii, an amazing mushroom, looks like blood. Because of the red spots splattered across its white cap, the mushroom looks somewhat like a bleeding tooth. One may think that a bleeding tooth fungus is a fungus that makes a tooth bleed, or some other grotesque interpretations may come to the reader’s mind after stumbling upon the name. The fungus belongs to the genus Hydnellum, a genus of tooth fungi. The tooth fungi produce spores on the tooth-like projections that emerge from the underside of the cap. There are 3-5 teeth per square millimeter. They are slender, less than 5 mm (0.20 in) long.

Some Hydnellum species produce yellow drops while some produce coffee-colored drops. The bleeding tooth fungus is known as ‘strawberries and cream’, as it resembles the dessert. Due to the red droplets that are present on the pinkish or whitish young fruit bodies, the fungus has earned the names ‘bleeding Hydnellum’ and ‘red-juice tooth’.

This fungus is found in North America, especially in the Pacific Northwest. It is seen growing on coniferous forest grounds. It is also seen in some parts of Europe (Italy, Germany, Scotland). Recently, it was discovered in Iran as well as Korea. The fungus usually grows among mosses and pine needle litter at the base of coniferous trees. It is found growing solitary, scattered, or even clustered together in forests dominated by jack pine, lodgepole pine, Douglas-fir, fir, and hemlock. It thrives in mountainous or sub-alpine ecosystems.

➺ During the life cycle of H.peckii, the dikaryotic (the fungus has two nuclei from different parents) and haploid states last for almost an equal amount of time. The fungus has an exceedingly transient diploid state. Ecological factors, such as moisture, temperature, and availability of organic content to support their growth, determine the distribution of fungi.

➺ Usually, the fruit bodies have a funnel-shaped cap with a white edge. However, great variations in the shape have been noticed.

➺ The fruit bodies can reach a height of up to 10.5 cm (4.1 in). The thick, short stems are often deformed. A stem can be 5 cm long, but only about 0.1 to 1 cm (0.0 to 0.4 in) may appear above ground. The upper part of a stem is covered by threads while the lower part which is close to the ground is covered by thin hair.

➺ A striking, thick red fluid oozes through the young fruit bodies when they are moist.

➺ Because of the strange appearance of the young fruit bodies, this hydnoid fungus can be easily identified when young. On maturity, it turns grayish-brown and loses its characteristic features. The surface of a matured cap becomes tough and fibrous. The pinkish-white teeth also turn grayish-brown.

➺ When young, the cap is covered with hair. During the process of aging, the fungus loses the hair. So, the caps of mature fungi are smooth.

➺ The fungus comes with a cap and a stipe (stem). Fruit bodies, growing very close, often fuse together (the process is called ‘confluence’). As a result of this, the shape of the cap can be round or irregular, and the width can be 4 to 20 cm (7.9 in).

➺ The bleeding tooth fungus is a mycorrhizal fungus. It establishes a mutual relationship with roots of certain trees (hosts). The enzymes produced by the fungus convert the organic compounds into absorbable forms, and improve the plant’s mineral absorption capabilities. In return, it gets ‘fixed carbon’ from the host. This type of mutualistic association that is particularly beneficial to the host is termed as ectomycorrhizal relationship.

➺ The fungus bioaccumulates the heavy metal caesium and plays an important role in the retention and cycling of caesium-137 in organic-rich forest soils.

The fungus comes with a mild odor (similar to hickory nuts), and is not poisonous. However, it has an extremely peppery, very bitter taste. So, it is inedible.

The fruit bodies of bleeding tooth fungus are not produced consistently every year. It should be noted that the absence of fruit bodies does not indicate the absence of its mycelium in the soil. So, counting the fruit bodies may not help determine the distribution of the fungus. With the help of polymerase chain reaction (PCR) technology, scientists can detect the presence of fungal DNA in the soil and can assess the distribution of fungi.