Ash trees are attractive deciduous trees which are great for landscaping large open spaces. Depending on the place of origin, a large number of species exist. In this article, we will learn about the most popular varieties of ash trees and their characteristics. 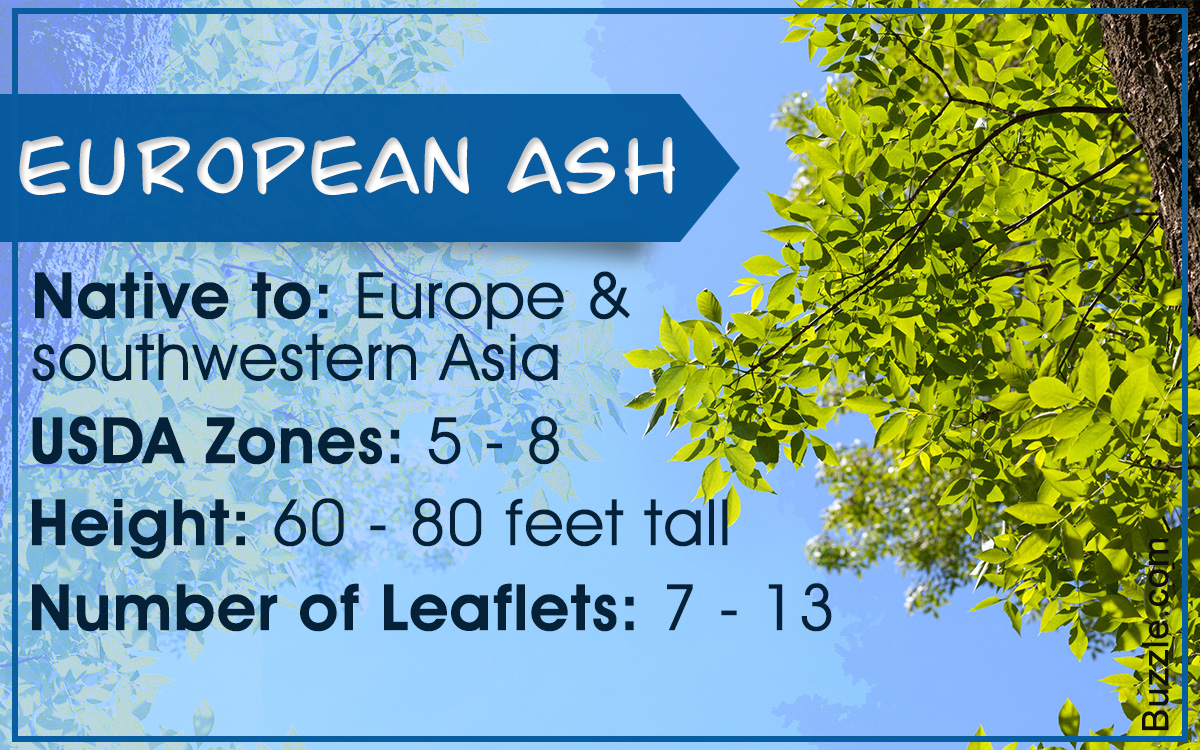 Ash trees are attractive deciduous trees which are great for landscaping large open spaces. Depending on the place of origin, a large number of species exist. In this article, we will learn about the most popular varieties of ash trees and their characteristics.

The thickest white ash tree exists in the Botanical Garden of the University of Vienna, Austria. Its girth is 20.27 feet wide, which is as long as 4 men laid head to toe in a straight line.

Over 60 species of ash trees are available across the world, of which the white ash is the largest variety. The trees are relatives of olive trees, and can appear in large to medium sizes. One can find that species of ash trees can have purple, yellow, or red leaves during fall, with large clusters of winged seeds. Ash trees have a beautiful round crown, which looks good in most open spaces.

Ash trees of the Fraxinus species can be identified easily by looking for a few distinctive characteristics. The most common of which are branching of the leaves and stems opposite each other, and the presence of pinnate compound leaves that usually have around 5 – 11 leaflets. Older ash trees will also usually have a diamond patterned bark. Not every branch or leaf may have an opposite mate, as buds and branches can die randomly. These plants grow well in rich moist soil, with good sun and lots of space. It is important to note that mountain ash trees are not true ashes, and they actually belong to the Sorbus family. Ash trees are abundant across America and Europe. The U.S. State of Wisconsin alone is estimated to have nearly 800 million of them. Ash wood is commonly used for making floors, cabinets, sports equipment, tools, and much more. Now let us look at the most common types of ash trees to be found.

Scientific Name: Fraxinus americana
Native Regions: Widely found across the northern and eastern regions of America
USDA Zones: 3-9
Average Height: White ashes are tall trees that can grow up to 80 feet, and in a few cases even higher
Leaves: Each leaf has 5-9 leaflets

Bark of a White Ash Tree

Also known as the Biltmore ash, this is one of the most common varieties of ash in the United States of America. This tree is a good addition to an outdoor landscape, is very shady with a spread of 40 -70 feet, and looks extremely attractive during fall. It is widely used to make sports equipment such as baseball bats due to the stiffness and resilience of the wood.

Due to its highly resilient nature, these trees can be found across a wide range of places with varied climatic conditions. One can easily plant and grow these trees in places with high pollution and poor soil conditions too.

Scientific Name: Fraxinus excelsior
Native Regions: Found all across Europe and parts of southwestern Asia
USDA Zones: 6-8
Average Height: A tall species of ash, these trees can easily grow more than 70 feet tall
Leaves: Each compound leaf of the European ash can have 7-13 leaflets

Although native to Scandinavia, these trees can be found all over Europe. Due to the flexible nature of the wood, they are a great choice for manufacturing bows. These trees are also used to make snooker poles and tennis rackets. In Norse mythology, a European ash formed the world tree known as Yggdrasil, which linked the nine worlds, including Asgard, Midgard and Niflheim. This tree is also known as the common ash. Unlike other ashes, European ashes have black buds instead of brown ones.

Named after the the sacred food in the Bible, the manna ash has a sweet sap extract. It is possible to extract mannitol and mannose from the sap, which are commonly used for medical purposes. These trees have very attractive white flowers which bloom during the month of May.

Scientific Name: Fraxinus angustifolia
Native Regions: Can be found in northwest Africa, south and central Europe, and southwest Asia
USDA Zones: 6-8
Average Height: Depending on the climatic and soil conditions, these trees can grow from 60 to 80 feet in height
Leaves: Each leaf has 7-13 leaflets 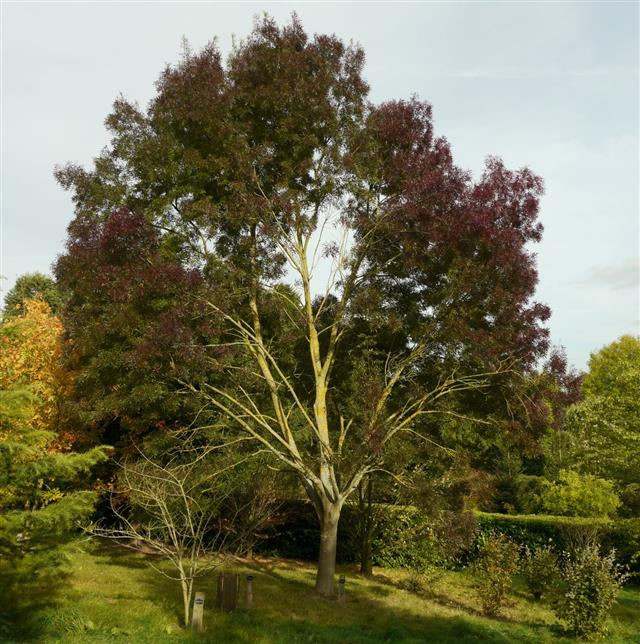 Also known as Raywood ash, desert ash, narrow-leaved ash, or claret ash, this tree has a very beautiful purple foliage during the fall season. This is a good choice if you are planning to grow trees in an urban area. It is best grown in acidic soil.

Also known as Arizona ash or Modesto ash, these trees are best grown in wet and alkaline soils. However, it is drought tolerant, and can be grown in dry conditions also. It is a good choice if you want trees that grow at a fast rate.

Scientific Name: Fraxinus nigra
Native Regions: Black ash trees can be found in the northeastern part of the United States and in a large area of Eastern Canada
USDA Zones: 3-5
Average Height: These can grow quite tall, with the average height being around 50-55 feet
Leaves: Each leaf usually has around 7-11 leaflets

Best grown in cold and wet areas, the wood of these trees can be used for weaving artwork and furniture. It also forms an important part of the wild ecosystem, as the seeds, branches, and leaves are used as food by a number of birds and animals.

The specialty of this tree is their square-shaped trunks, and inner bark which turns blue on exposure to air. This property was used in earlier times to extract blue dyes. It is best grown in soils that retain water. It has a dark green foliage, which turns yellow during fall.

Scientific Name: Fraxinus latifolia
Native Regions: This tree is native to the Pacific northwest region of America
USDA Zones: 7-9
Average Height: A medium to large tree which can grow from 50 to 70 feet in height
Leaves: Compound pinnate leaves with 5-9 leaflets

These trees can be recognized by their branches which spread outward from the trunk, almost parallel to the ground, and can look similar to a maple tree. It is best grown in areas with wet and rich soil.

Also known as the two-petaled ash, the California ash is a mildly drought tolerant variety. Before fall, one can observe some pretty white colored flowers, which have a very pleasant aroma.

Scientific Name: Fraxinus caroliniana
Native Regions: Parts of southern United States
USDA Zones: 7-9
Average Height: Carolina ashes are medium-sized trees, and can grow up to 40 feet in height
Leaves: Each leaf of a Carolina ash has around 5-7 leaflets

Also known as Florida ash, pop ash, water ash, and swamp ash, these trees are mostly found near and around the states of North and South Carolina, in addition to a few other states in the southern United States. These trees prefer wet soil, hence, they are commonly found near swamps.

Scientific Name: Fraxinus greggii
Native Regions: Commonly found in New Mexico, Texas, and parts of Arizona
USDA Zones: 6-10
Average Height: These ash trees are quite short as compared to the others, and can grow 10-20 feet at the most
Leaves: Small leaves, which can have 3-11 leaflets

The Gregg’s ash is actually a large shrub which can be controlled to become a small tree. It is identifiable due to its smaller leaves, and can also be grown in large containers. This ash variety is drought tolerant. Other names for this tree are littleleaf ash, dogleg ash, and Mexican ash.

Scientific Name: Fraxinus profunda
Native Regions: Northern and eastern parts of America
USDA Zones: 6-9
Average Height: A very tall species of ash, most trees grow up to 80 feet in height, with a few specimens growing even higher than 100 feet
Leaves: The pumpkin ash has 7-9 leaflets for every leaf

These ash trees get their name from their unique tree trunk, which swells up towards the bottom, especially in wet conditions, making it look like a pumpkin. Due to this reason, the tree is also known as a swell butt ash.

If you are looking to create an attractive and fresh atmosphere around your house or within your neighborhood, the above information on ash tree varieties should prove useful to help you choose from the many varieties.