No Kidding! Check These Pictures of Trees That Have a White Bark

The color of a tree's bark depends on whether it absorbs the sun's rays or reflects them. So, the trees with a white bark appear white as they reflect most of the sunlight received. The Paper Birch, Sycamore, and Quaking Aspen are some trees that have a white bark. Here's more...

Home / Uncategorized / No Kidding! Check These Pictures of Trees That Have a White Bark 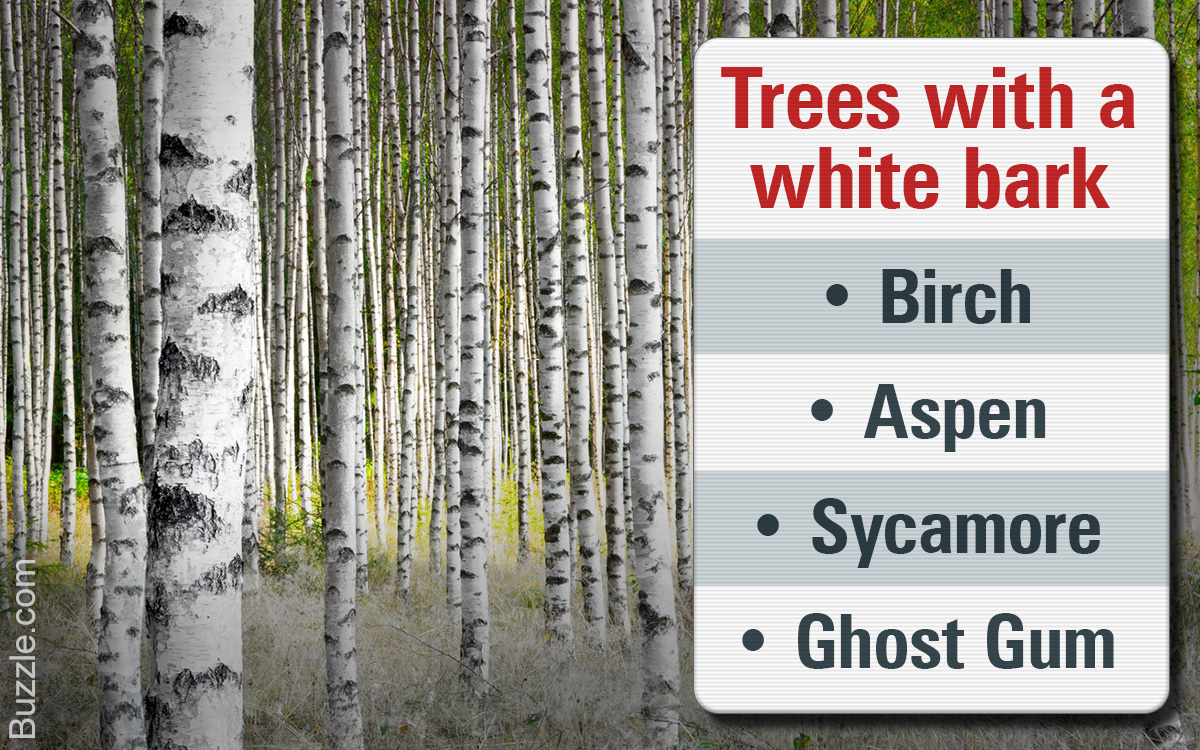 The color of a tree’s bark depends on whether it absorbs the sun’s rays or reflects them. So, the trees with a white bark appear white as they reflect most of the sunlight received. The Paper Birch, Sycamore, and Quaking Aspen are some trees that have a white bark. Here’s more…

The root, bark, and tender leaves of the paper birch are used in making tea.

How do we paint a tree? Of course, with green color. Is that even a question to ask? And with what color do we paint the bark or the trunk of the tree? With brown color. We never doubt this color combination while thinking of a tree. We may picture the typical hues of the leaves, flowers, or the fruits of a tree. But have we even wondered about what colors the barks of trees actually sport?

Besides the normal brown tree trunk, there are many other bark shades, both light and dark, that make some trees more noticeable on nature’s wallpaper. Trees with a distinct bark also are chosen for the unique contrast they give to our yards, especially if you live in the forested corner of a neighborhood. Here are some examples of trees that stand out in their species, for having white barks.

Why do trees have a white bark? This difference in coloration is attributed to the different absorption of sunlight by these trees. As we know, lighter objects reflect more sunlight than they absorb. Similarly, the trees that absorb more sunrays tend to have barks that are darker in color, unlike light-colored barks in some other trees. The reflection of maximum amount of sunlight is also a mechanism of temperature modulation for the trees in the highlands.

Sometimes a bright white, trees with a white bark generally have tones, like light-grayish, greenish, or brownish. Exfoliation of the tree trunk also results in uneven coloring. The peels and the underlying stem appear different, creating a patchwork-like pattern on some trees. Here are the most common varieties of trees with white barks. 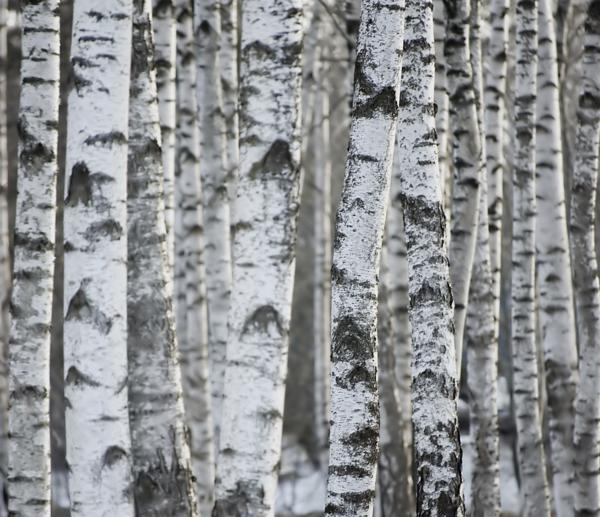 This birch variety is a deciduous, native to the Connecticut river valley in North America. It is known for its bright-white bark, which is originally brownish-red, and gradually turns into a bright-creamy-white. Its bark peels off into thin layers, resembling paper, thus, the name paper birch. Commonly used in landscaping, these trees are planted a lot in universities and public parks.

The weeping birch and paper birch are known for their vivid and attractive white tones. The bark, when made into a teepee (or conical shelter), literally appears similar to reflectors put together onto a wall. Small canoes and wigwams for shelter were built using these birch barks by the Native tribes. One such canoe is displayed at Old Town in Maine, and is said to be around 100 years old. For building a canoe, a tree having up to 9 thin layers of bark used to be felled, its bark cut, and striped into one piece. The bark also has medicinal properties; it is used to treat skin problems. The tree is mainly used for pulpwood, plywood, and veneer. 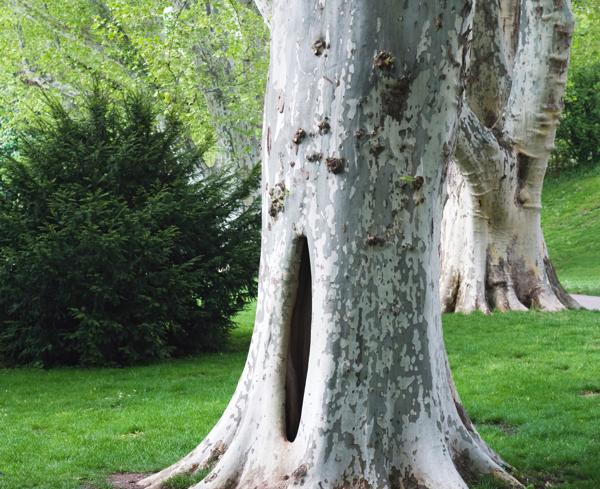 The sycamore tree trunk undergoes exfoliation, but in patterns. The magic of this process can be seen if we carefully observe the main stem of the tree, from bottom to top. The lower portion of the bark is grayish-brown. At around the height of ¼ of the bark, it starts peeling off. This portion appears scaly and camouflaged, as it is tanned and half-brown in color. Above, at the top of the trunk, the bark looks almost white. 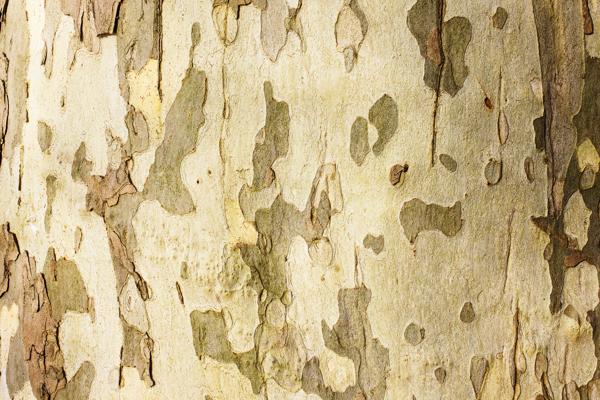 The upper smoother, white portion defines a mature trunk and branches. This gradation, along with the scales on the skin, makes the sycamore unparalleled. This tree can grow in sandy soil, and also along rivers and streams. These are known to have huge, broad trunks; the diameter reaching over ten feet in some trees. 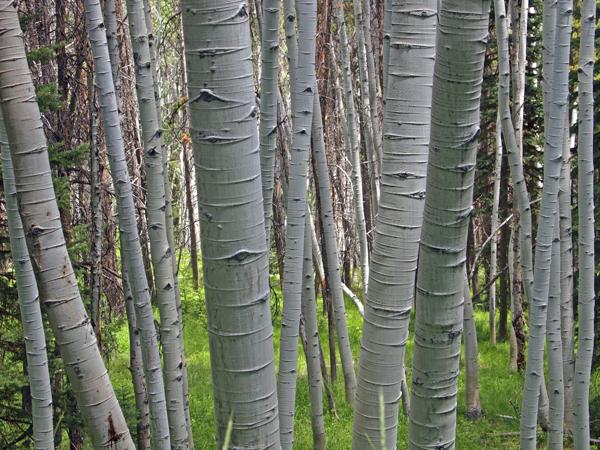 The quaking aspen takes its name from the ‘quaking’ or shaking of its leaves. It is native to the United States, and is found in Alaska and the western part of the country. Also a deciduous tree, it has a bark that peels off and goes on thinning, becoming thicker and furrowed as it ages. This process alters its shape, especially towards the base. 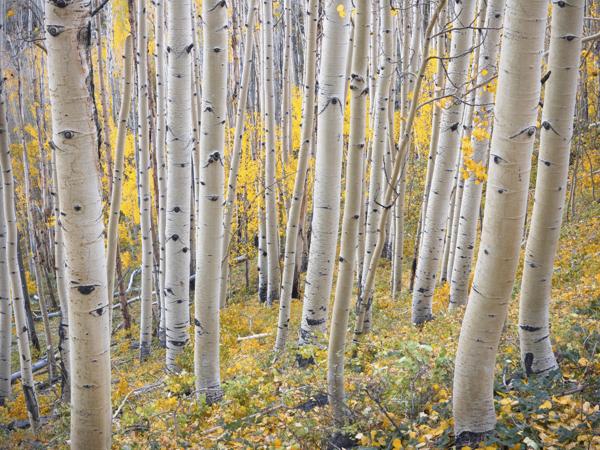 The color of its bark is greenish-white or grayish-white. The tree is prized for its white bark and beautiful fall colors. It is a very important fiber source, and is used in the manufacturing of pulp and flake-board. Its wood serves very well for playground structures, as it does not splinter. 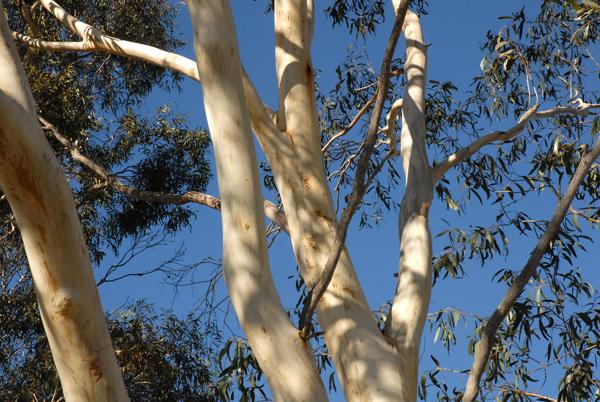 A tree native to Australia, it is found mainly in the arid central regions of the Gibson desert and parts of the Northern Territory. Rocky slopes, flat zones near dry creeks, and red sand plains form its habitat. It belongs to the Eucalyptus genus. It is known for its typical aroma, similar to that of methanol. 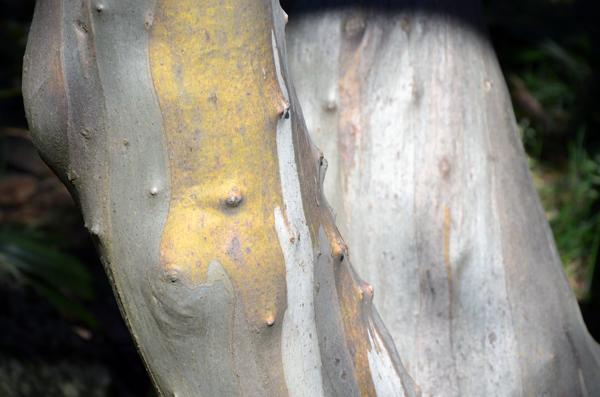 These trees are drought-tolerant, and can grow well on dry river beds too. The bark of the ghost gum is smooth throughout, and creamy-white or pinkish in color. It is slightly powdery, and shreds into thin pieces. 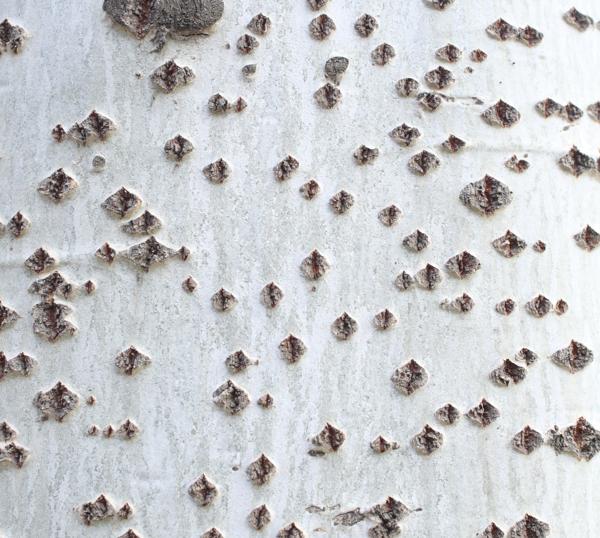 Also known as the silver-leaf poplar, this tall tree is native to central and southern Europe, western Siberia, and central Asia. It came to the Americas around the 1740s. The bark of the white poplar is originally greenish-white and smooth. However, it gradually transforms into a dark-colored bark, with a rough surface. The cross-section of the stem of this tree shows a star-shaped pith with five points. It is planted as an ornamental tree for its color contrast of green and white.