In Buddhism, Bodhisattva is a person who, despite the ability to attain nirvana, delays it to serve those beings who are suffering.

We, as humans, are always finding ways to seek refuge for all our problems and issues in one sole entity; sometimes God. Atheists might not agree, but there are many minds in this world who do believe in certain occult sciences. Though the term ‘occult’ has a very wide scope, we can relate to it as being ‘our zone of mind power’ at our level. So, out of such varied sciences, or arts, one is the science of Feng Shui. Here, the ‘place’ of everything matters, as defined by the logic behind this body of knowledge.

As we often see the Laughing Buddha around us, there is another divinity from the Buddhist traditions that is kept as a symbol of good energy. It is the Goddess Kuan Yin. Let us learn more about this deity, and the meaning and symbolism associated with it.

The commonly accepted origins of Kuan Yin can be sourced to the Buddhist sutras. It is understood to be the female counterpart of the male Bodhisattva ‘Avalokiteshwara’. However, according to Chinese folk religion, there are different stories of her origins.

There are many legends about the origins and the life of Kuan Yin. One of them describes her as the divine third daughter of a cruel king. This Buddhist saint Miao Shan, from the 12th century, is believed to have peacefully pursued her religious calling at a monastery, despite her father’s several attempts to force her to change her mind, and later surrender her eyes and hands to cure and save the life of her father.

Kuan Yin is a deity respected by the Mahayana Buddhists, and mostly revered in East Asian nations. With several names or different ways of spelling it, like ‘Kwan Yin’, Quan Yin, and Guanyin, it is known as the Goddess of Mercy. The name ‘Kuan Yin’ or ‘Guanyin’ (short for Guanshiyin), literally means ‘One who observes the sounds (or cries) of the world’.

Kuan Yin basically symbolizes kindness, love, compassion, pity, empathy, concern, or solicitude. These are not just emotions that are exhibited. This goddess symbolizes the divine love and energy that comes from enlightenment. She is the epitome of love for her worshipers. When one calls upon her, it is believed that she answers the cries (prayers) of the depressed beings. Thus, a statue of Kuan Yin is said to balance the energy levels of the place, as it cures all the ills.

Kuan Yin statues show the goddess as mostly covered in a white robe. Kuan Yin and the dragon, Kuan Yin on a lotus or palm, Kuan Yin holding a child, and seated or standing statues of the goddess, are the various kinds of statues we come across. Let us look at the meanings of these varying details of the statues.

Holding a Child: Kuan Yin looks like the caring and kind mother, as she holds a child. This symbolizes not only the mother-child relation, but also the characteristic nature of the life cycle of creation, sustenance, and destruction. It is also a sign of spiritual life.

The Vase: The vase held by the goddess contains divine water. Often, statues depict a stream of water or ‘Water of Life’ being poured down from a vase. This water has the power to eliminate the sufferings of the poor, and is believed to be the water of creation. It can free human bodies and minds from any defilement. The sacred dew drops act as an elixir for the miserable.

Willow Branches: She is portrayed to bear willow branches to shower her children with lots of warmth and love.

Ripe Rice: At times, the goddess is seen holding a bundle of ripe rice too. This stands for fertility and sustenance.

Sometimes, the statue depicts the goddess holding a lotus flower in her hand. The lotus flower specifically suggests purity, without any evil or wrong.

Also known as the Protector of Sailors, she is seen to be seated on a bloomed lotus that floats over water.

The goddess is also associated with vegetarianism, as she signifies the values of purity, compassion, and mercy.

Where to Place a Kuan Yin Statue?

A Kuan Yin statue can be placed at the entrances of offices or at home. The face of the statue should be towards the entrance or the door. This helps in keeping positive energies in that area, adding a good welcome gesture to the first point of contact for entrants. Considering open spaces, setting up a spot for the statue near a tree, would be a great idea. If you have an entrance that goes through or is a part of a garden, there wouldn’t be a better space for this statue. It can be on any side. But be careful while placing it, so that it does not stand right at the door.

Also, keep in mind that a Kuan Yin statue should not be based directly on the ground. A certain height from the ground, of around 3 feet should be insisted upon. Specially when placing the statue indoors, do not keep it on the floor, in the bathroom, or in the kitchen; basically avoid low areas.

In Japan, Korea, and other East Asian countries, Kuan Yin statues are placed at prominent places, so that all passers-by are reminded of the spiritual values helping them stay away from selfish acts. 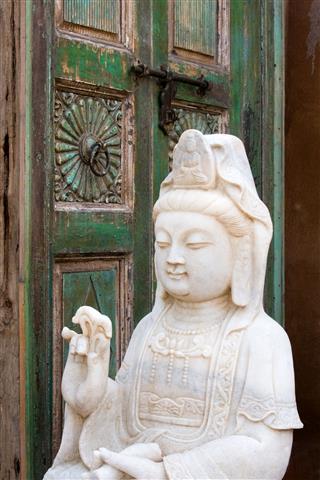 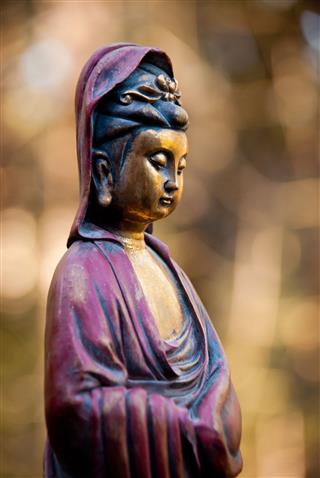 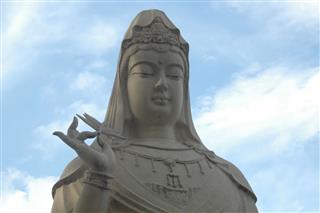