Mulberry Tree Facts That are Absolutely Compelling to Read

The white mulberry tree was introduced to the American continent by the British colonizers. While that's a well-known fact, very few people know that the species has been outlawed by some American cities for being a nuisance.

The white mulberry tree was introduced to the American continent by the British colonizers. While that’s a well-known fact, very few people know that the species has been outlawed by some American cities for being a nuisance.

In 1984, the city administration of Tucson, Arizona, banned the planting of mulberry trees citing that the amount of pollen produced by these trees was harmful for humans.

Mulberries are the deciduous trees native to the warm temperate and subtropical regions of the world. The species, which derives its name from its edible fruit, is found in abundance in several countries of Asia, Europe, Africa, and America. Even though it is virtually grown in every American state―Nevada and Alaska being the only exceptions―many people continue to be unaware of some basic facts about them.

>> Mulberry trees have been known to mankind since a long time. Historical records, for instance, suggest that the leaves of these trees were used by the Romans for the treatment of various diseases of the mouth, trachea, and lungs. Over the course of time, several other medicinal uses of this tree were discovered, but what really propelled this tree to fame was its use in the silk industry.

>> Mulberry leaves are used to feed silkworms (Bombyx mori) in order to enhance silk production; the practice began in China and soon spread to various other countries. The silkworm only feeds on mulberry leaves, and it was precisely because of this reason that the commercial cultivation of mulberry trees―especially the white mulberry―was promoted in various parts of the world.

>> Ancient folklore and myths acknowledge the importance of mulberry trees to various ancient civilizations. According to a German folklore, the roots of mulberry tree are often used by the devil to polish his boots (and therefore, these trees are associated with evil).

>>The term ‘mulberry’ refers to more than a hundred species belonging to genus Monera. The genus happens to be one of the most complex genera of kingdom Plantae, with no consensus on the exact number of species among the botanists themselves. Nevertheless, the widely recognized varieties of the mulberry tree include:

>> The white mulberry tree, native to China, was introduced to the continent of North America during the colonial period to promote the silk industry. The variety was eventually hybridized with the locally available red mulberry (a.k.a. the American mulberry) variety.

>> Almost all the mulberry tree varieties grow very fast when they are young but eventually, slow down. The average height of mulberry trees usually depends on which variety you are taking into consideration. The red mulberry, for instance, can grow to a height of 65 feet, while the Asian white mulberry attains a maximum height of 40 feet.

White and Red Mulberry are the two most famous popular mulberry varieties.

>> Incidentally, the native red mulberry (reddish-brown bark) and the Asian white mulberry (ochre-gray bark) are the two most popular mulberry tree varieties. The bark of both the species has a rough surface with vertical cracks and oval-shaped alternate leaves, which are approximately 2-6 inches long.

>> Mulberry trees have a lengthy growing season, which in turn, ensures abundant crop. Having said that, if you are planning to grow mulberry trees for their fruits, you will have to be patient as it will take at least 10 years for the trees to start bearing fruits.

Mulberries are enjoyed by both humans and birds alike and are used in various preparations.

>> Mulberries are inch-long berry-like fruits, which are white to green or pale yellow in color when they are raw and turn to red, dark purple, or black when they ripen. These fruits, which are known for their sweet flavor, are delicacies among humans and birds alike and are also used in various preparations.

>> Mulberry trees grow well in warm, well-drained, loamy soil. In the United States, the USDA plant hardiness zones 5-8 serve as an ideal habitat for the species. These trees require ample space and a lot of sunlight to grow, and hence, it is wise to plant them at least 15-20 feet apart.

>> Like other deciduous species, even the mulberries require regular pruning. Though the best time to prune the species is just after the growing season, you can also prune it in winter; that’s if you think the foliage has thickened and may damage the tree.

The color of a mulberry changes as it matures from red to deep purpulish-red.

While definitely helpful, mulberry trees are notorious for their pollen production, which can well exceed the admissible count of 1500 in the spring season. It was precisely for this reason that the city administration of Tucson, Arizona, banned it in 1984. The city of Las Vegas, Nevada, followed suit citing the same reason in 1991, and El Paso, Texas, followed a year later in 1992. While some of these cities are contemplating doing away with this ban, that is bound to take some time as the risk involved in pretty high. 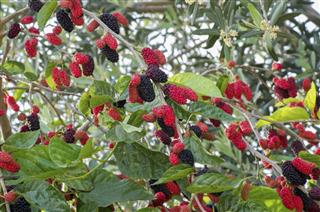 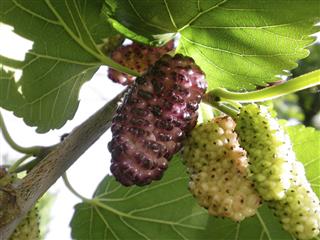