There are more than 100 species of lilies known to humans. Here are some of the most fascinating facts about lily flowers.

There are more than 100 species of lilies known to humans. Here are some of the most fascinating facts about lily flowers.

When you have only two pennies left in the world, buy a loaf of bread with one, and a lily with the other.
~ Chinese Proverb

This famous Chinese proverb aptly defines the beauty of lilies in just one sentence. The lily flower is undoubtedly one of the most beautiful flower in the world. Available in wide range of colors from white, yellow to pink and red, this flower hardly fails to attract attention. White lilies stand for beauty and purity. This may be one of the reasons why white lilies or calla lilies are used for making bridal bouquets. Apart from its beautiful appearance, not many of us are aware about the life cycle, uses or species of lilies. Therefore, the interesting facts about lilies mentioned here can prove helpful. Scroll down for more.

Facts About the Lily Flower

Lilies are found in Europe, India, Japan, the USA, and Canada. In short, these pretty flowers are found in nearly all parts of the world. In fact, it is one of the most common flowers found in the continent of Europe.

Nearly all the white lilies are scented. Most of the other colored varieties are completely devoid of any perfume or scent. But, the tiger lily is an exception as it has a sweet scent.

Lilies are large flowering plants which are grown usually for flowers. However, very few people may be aware that some species of lilies are also grown for their edible bulbs.

Lilies have been symbolized for different meanings in different parts of the world. While it was a holy flower for the Assyrians, in Feng Shui, it stands for abundance.

When talking about the meanings and symbolism associated with lilies, the white lily stands for purity or virginity, the tiger lily is known for wealth and majesty, the day lily symbolizes coquetry, whereas the lily of the valley is known for sweetness.

Another interesting fact about lilies is that in Chinese language, it symbolizes ‘being forever in love’! It also stands for good luck in the Chinese culture.

For a long vase life

Lilies have a very long vase life. However, if you want the lilies to stay fresh longer, and prevent them from staining, you should remove the excess pollen found in these flowers. The pollen can be removed using a toothbrush. 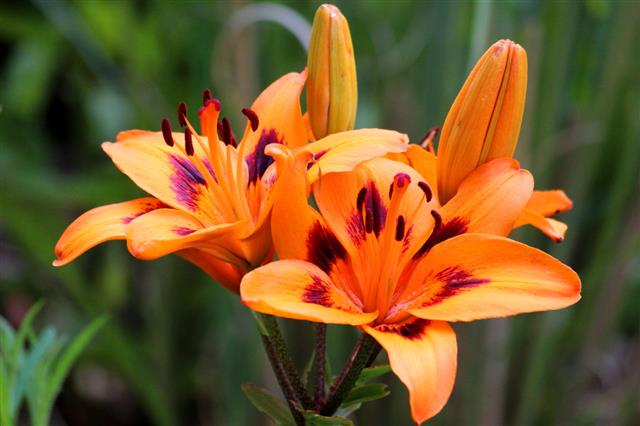 Tiger lilies are called so because these flowers are large, wide, have bright yellow color and spots on it. Due to their attractive appearance and size, they make excellent garden flowers.

Lily plants grow well in spring or summer. Most species of these plants are dormant in winter season.

Lilies have also been known and used for medicinal purposes since long time. Lily containing medications were used to treat toxicity and depression.

When talking about toxicity, it should be noted that lilies can be toxic to cats. Therefore, if you have a pet cat, you should avoid planting lilies in your garden.

Lastly, the lily flower is the second most favorite flower in the world (first being the rose). Therefore, it is widely used in bouquets, for making centerpieces, as gifts, etc.

I hope these facts were really fascinating to read. So, if you were thinking of planting some beautiful flowers in your garden, why not consider planting some colorful lilies? As they are available in hundreds of varieties, you will surely find the one you like! You can research on the Internet to find complete information on lily plant care which will be helpful to you.