4 Really Effective Ways to Get Rid of Cedar-Apple Rust

Cedar-apple rust is a disease which is caused by a fungus belonging to the genus Gymnosporangium. It commonly affects apple and crabapple trees. Gardenerdy lists out a few effective ways to get rid of cedar-apple rust. 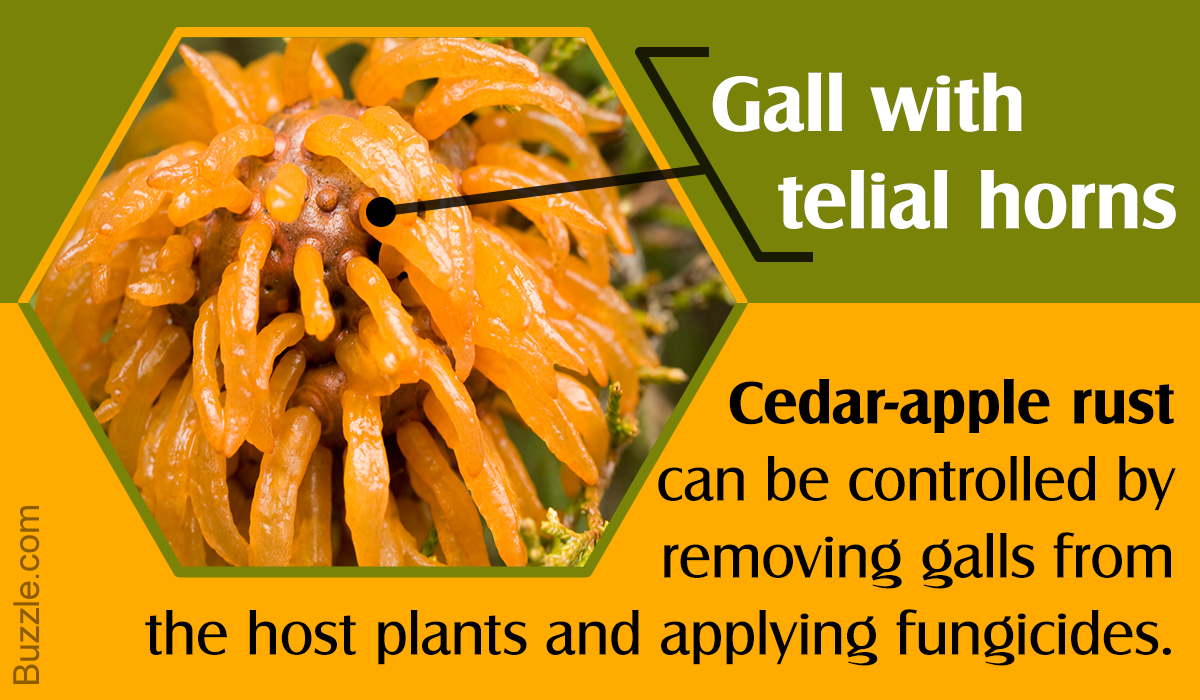 Cedar-apple rust is a disease which is caused by a fungus belonging to the genus Gymnosporangium. It commonly affects apple and crabapple trees. Gardenerdy lists out a few effective ways to get rid of cedar-apple rust.

It was a Danish botanist named Anders Sandøe Ørsted who explained the two-year (19-22 months) disease cycle of the cedar-apple rust. An unusual fungus, Gymnosporangium juniperi-virginianae is a heteroecious rust that requires two host plants to survive.

Cedar-apple rust is common in areas where Malus domestica (apple), Malus sylvestris (crabapple), and other species from the Malus genus grow near Eastern red cedar, ornamental junipers, or other plants belonging to the Juniperus genus. This fungus spends a part of its life cycle on junipers, and the rest on rosaceous hosts such as apple and crabapple. Closely related to this rust are cedar-hawthorn rust and cedar-quince rust, which are caused by Gymnosporangium globosum and Gymnosporangium clavipes, respectively. These are fungi that belong to the same genus, and also need two hosts to complete their life cycle.

Being a fungus, Gymnosporangium juniperi-virginianae thrives in damp, moist environment. The signs of this fungal disease can be seen after the first rain in the spring. This rust overwinters in the form of ½-2 inch wide, kidney-shaped brown galls (outgrowths that are covered with small depressions) on the twigs of cedars or junipers. The fungus starts growing after the first rain in early to mid-spring. When the galls become wet, they produce gelatinous tendrils or telial horns that are made of two-celled teliospores. Each of these teliospores produces four basidiospores. The microscopic spores produced by these gelatinous telial horns are carried by the wind. The spores that land on apples or crabapples germinate, thereby infecting these trees. The following sections list out the symptoms of cedar-apple rust fungus, along with ways to get rid of cedar-apple rust. 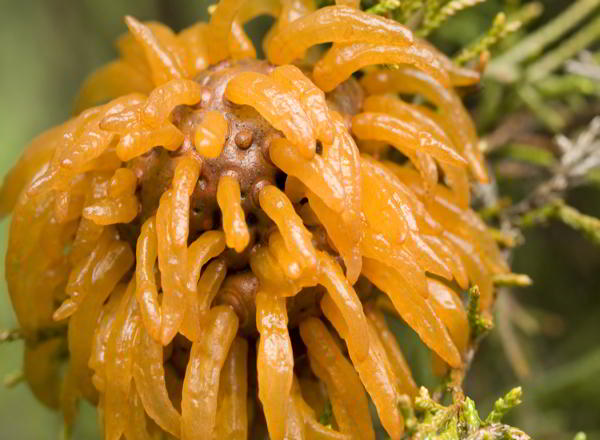 Aeciospores that are released from the cups in mid-summer to autumn are carried by the wind. These infect only the junipers, and not the apple or crabapples.

Signs of Cedar-Apple Rust on Junipers

The disease cycle continues after junipers are infected. The signs of an infestation include:

◆ Formation of galls on cedars or junipers
◆ Development of bright telial horns, which become gelatinous after rain

After the development of gelatinous telial horns, basidiospores are produced and carried by the wind. As many as 7.5 million basidiospores may be produced in a single gall. These spores land on the apple/crabapple trees, and germinate and infect the leaves.

How to Get Rid of Cedar-Apple Rust

Cedar-apple rust fungus causes galls on junipers, which can sometimes cause dieback of twigs. However, it doesn’t cause significant damage in junipers. In severe cases, cedar-apple rust can cause defoliation and fruit loss in apples/crabapples. Here are some ways to get rid of this fungus:

Eliminate One of the Host Plants

As this fungus requires two host plants to complete its life cycle, removing one of the hosts can help prevent damage. As a part of their life cycle, the spores produced by the telial horns are carried by the wind. If there’s an apple/crabapple tree in the vicinity, the spores could land on them, which in turn can lead to an infestation. So, if a few juniper trees are present around the apple/crabapple in the area, these could be removed. Eliminating one of the hosts can help in preventing an infestation.

Basidiospores that are produced on a juniper are often short-lived. More often than not, infections occur due to spores that are produced by a juniper located within a few hundred feet from the apple or crabapple tree. So, if the two host plants are located about a mile apart, it is advisable to remove one of them. Separating the two host plants by a distance of 2-3 miles can minimize the possibility of this fungal infection.

Grow Varieties that are Resistant to Cedar-Apple Fungus 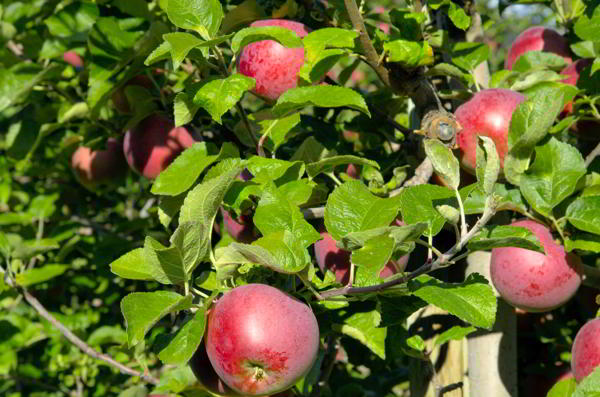 There are a few apple/crabapple cultivars that are resistant to the cedar-apple rust. These include: 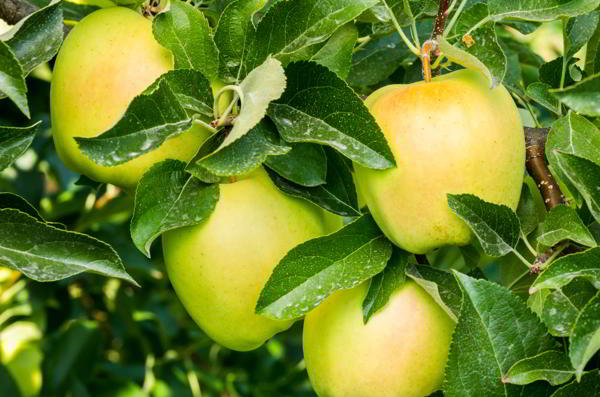 If you live in the Eastern part of the Rocky Mountain region, avoid growing apple cultivars that are known to be susceptible to this fungus. Here are the names of some of the varieties that are prone to getting infected by this fungus:

Pruning the affected parts (galls) of the juniper tree can also lower the possibility of infections to some extent. It is advisable to prune the host plants during the dormant season, which is winter. The fungus begins to grow in the early spring, after the first rain. So, make sure that you remove the galls before the spring. Also, dispose off the dead or fallen leaves from under the trees. In severe cases, the entire plant or tree may have to be removed or destroyed.

Besides the aforementioned methods, apple and crabapple trees can be protected from the spores produced by the junipers by applying fungicides. The spores are produced in spring, which is why organic fungicides can be applied weekly on apple and crabapple trees from the time the buds begin to form. The release of spores only occurs during the spring, which is why fungicides don’t need to be applied after spring. More often than not, the fungicide includes chlorothalonil, mancozeb, propiconazole, sulfur, myclobutanil, or copper soap.

Fungicides should be applied to the juniper trees at the time when aecia develop on apple or crabapple trees. It is advisable to use fungicides that are registered for use in your area. Also, if the apples/crabapples will be harvested for consumption, make sure that you use fungicides that are registered for use on edible fruits. Make sure that you read the label properly, and follow the instructions provided by the manufacturers regarding the application of the fungicide.

On a concluding note, refrain from planting apple/crabapple trees next to or around junipers. In case you notice the signs of an infestation, follow the aforementioned ways to get rid of cedar-apple rust.