Tips to Take Care of the Majestic Blue Mystique Orchids

The blue color of the Blue Mystique orchids is not a result of hybridization. The color is due to the infusion of a dye in white orchids. Gardenerdy provides information on Blue mystique orchid care.

The blue color of the Blue Mystique orchids is not a result of hybridization. The color is due to the infusion of a dye in white orchids. Gardenerdy provides information on Blue mystique orchid care. 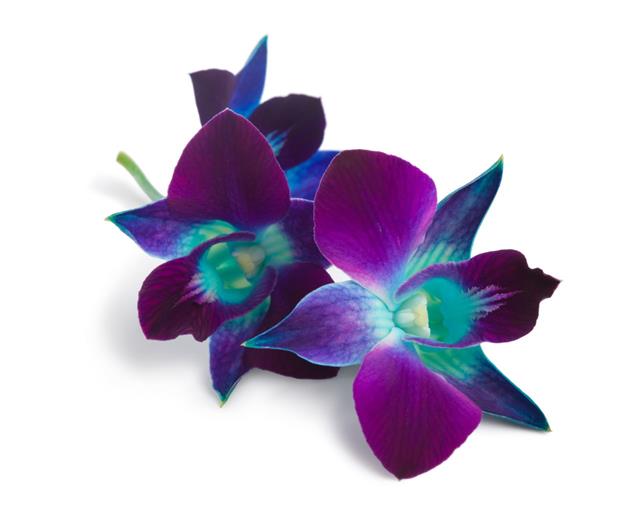 In 2013, true blue orchids were seen at the 11th Asian Pacific Orchid Conference held in Okinawa, Japan. These were created by Dr. Masahiro Mii at Chiba University, Japan, using a gene from the Asiatic dayflower.

Blue Mystique orchids belong to Orchidaceae family and Phalaenopsis genus, which is native to the Indian subcontinent, China, Southeast Asia, and some regions of Australia. This genus comprises about 60 species. These plants are immensely popular as houseplants due to their beautiful blooms. Blue Mystique orchids were introduced by Silver Vase at the Tropical Plant Industry Exhibition in 2011. These orchids have been subjected to a lot of criticism by flower breeders and horticulturists, as their color is not a result of hybridization. The attractive blue color of the flowers results from a patented process involving the infusion of a specially-formulated dye on white orchid. Moreover, the infusion process is just restricted to the existing blooms and buds; the new flowers are white in color. Many customers complained that they were not aware of the fact that Blue Mystique was not a real blue orchid. Thereafter, Silver Vase placed a tag with the plants stating that new blooms would be white.

Flowers from the Phalaenopsis genus are good to look at, and are easy to care for. However, you should buy a Blue Mystique, only if you don’t have an issue with buying a plant that provides blue-colored flowers initially and white flowers later. The flowers may last up to three months. They might bloom twice a year, if one cares for the orchids properly. The Blue Mystique orchids have to be provided the same growing conditions that you would provide any Phalaenopsis orchid. Here are a few pointers regarding the light, soil, watering, and fertilizer requirements.

Light Requirements
This is a shade-loving plant, especially during summer. It is advisable to protect the plant from direct sunlight, as that could damage the leaves and flowers. However, it does require bright, indirect light. Excessive light can result in fewer flowers that might also be smaller. On the other hand, foliage that is floppy and dark green in color might be indicative of insufficient light. Ideally, the leaves should be firm and medium green in color.

Potting Medium
Well-drained soil is another requirement for growing the Blue Mystique orchids. The potting medium should not turn soggy. Therefore, you can opt for mixes that drain quickly. You can opt for charcoal, perlite, fir bark, sphagnum peat, etc. The plant also needs to be repotted if it has outgrown the pot or the potting mix has broken down. Repotting should be done during the spring or fall, after the flowering season. While repotting, shake off the potting mix from the roots and remove the decayed roots. Put a handful of the potting mix in a bigger pot. Use a stick to work the mix in between the roots. Fill the pot with medium.

Humidity
Phalaenopsis orchids don’t have pseudobulbs that could help them store moisture. It will do well in 50-70% humidity. It must be noted that the plant can even adjust to lower humidity, if its water requirements are fulfilled. When it is very dry, you could use a humidifier. If you are going to keep the plant on a windowsill, you can place it on a humidity tray. However, use pebbles to separate the pot and tray. This is to ensure that the plant is not directly placed on water. If humidity is high, you can switch on a fan so that there’s constant circulation of air.

Watering
Make sure that you are watering your Phalaenopsis Blue Mystique orchid on a regular basis throughout the growing season. Water the plant during early morning hours. However, reduce the frequency of watering during the winter. Make sure that the potting mix provides proper drainage. It must be noted that orchids are epiphytes that derive nutrients from air and moisture. When their roots are exposed, they dry out faster. So, water the plant properly, whenever needed. Before watering the plant, make sure that the potting medium is nearly dry, but don’t let the roots dry out completely. If the plant is placed in a pot, the roots are not exposed to air, which is why they don’t dry very quickly. So, don’t go on a watering spree, as that can cause the roots to rot. Keep the leaves dry to avoid crown rot.

Fertilizer
During the active growing period, you can apply a balanced (20-20-20) or weak orchid fertilizer prepared by mixing 1 teaspoon in a gallon of water every week. This is ideal for orchids in a peat-based mix. For orchids in a bark mix, an orchid fertilizer with a higher nitrogen content (such as 30-10-10) can be used. During the flowering season and winter, the fertilizer can be applied once a month. Excessive use of fertilizer should be avoided as that can cause salt buildup, which in turn can lead to slower growth and damage to the roots.

The aforementioned conditions must be provided to the Blue Mystique orchid for it to bloom and stay healthy. Since orchids are epiphytes, a healthy root system is essential. There is one more step that you need to perform after the blooms have fallen off. Cut the spike just above the node where the first bloom appeared. This will stimulate the growth of a new spike, which may re-loom in a few months. Do remember that the new flowers of the Blue Mystique will not be blue, but if you do love white Phalaenposis orchids, there would be no reason to be disappointed.