Maples are common names for the trees under the genus Acer. The maple tree leaf has been adapted as the national arboreal emblem of Canada. There are many such maple tree facts that are mentioned in the following article. 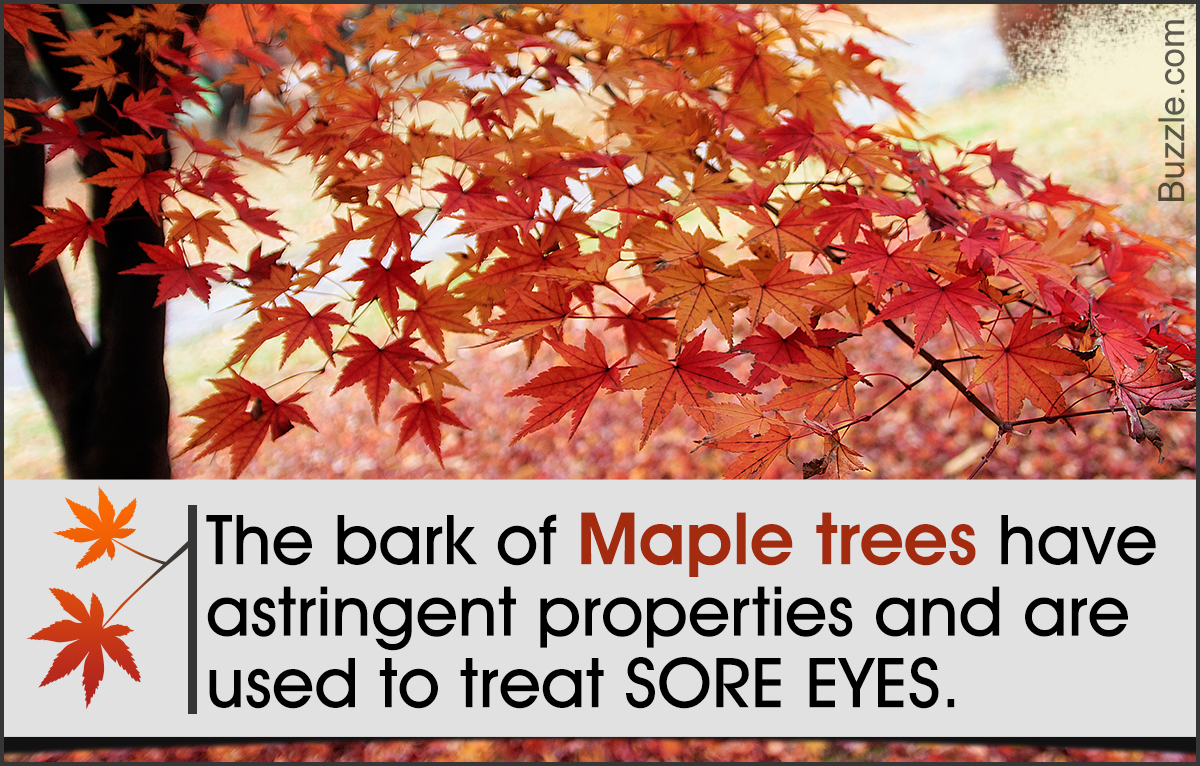 Maples are common names for the trees under the genus Acer. The maple tree leaf has been adapted as the national arboreal emblem of Canada. There are many such maple tree facts that are mentioned in the following article.

Maple trees are commonly found in gardens and their sap on our dining tables, in form of Maple syrup. Maples are trees under the genus Acer, classified into the family Aceraceae. There are over 125 species of Acer trees, found in Asia, Europe, north Africa and north America. Maples are deciduous trees that grow up to 10-45 meters in height. Many maple species have a dense and fibrous root system. The Maple tree branches spread horizontally and form a compact rounded head when fully grown. The young Maple trees have a smooth bark that becomes brown, rough and corky as they grow older. There are longitudinal furrows on their barks and crimson stalks of young leaves on their branches.

This angiosperm has clusters of erect flowers, a distinguishing feature that appears with the leaves. The leaves are small and have 5 blunt lobes. The leaves turn to a golden hue during autumn. The maples produce winged seed pods, that are dispersed in autumn. These winged seeds reach the ground in a helicopter like movement. The pods stand horizontally when still attached to the tree. Small brown buds are developed in winter, on the maple trees. The following is the scientific classification of Maple trees.

Maple trees are the most common trees found in the United States. These tress are found growing in the Northern Temperate Zone.

The word Acer is a Latin word that means ‘sharp’. This is in reference to the characteristically sharp leaves of Maple trees. Maple tree flowers have the ability to self-pollinate. Many clusters can even pollinate themselves. The other common form of pollination is wind. Cross-pollination can take place with the help of flies and other insects. Small fruits are developed after pollination, that turn into winged seeds. There are two small seeds joined together by a weak link and with two thin, paper like wings on each side. There are three principle veins radiating at the base of the leaf in all Maple trees. The lobes of many Maple trees are shaped according to the veins. There is one smaller lobe on either side of the long slender stem and is bright crimson in color when young.

The best sap is produced by sugar maple and rock maple. The most important factor in the production of the final maple syrup product, is the weather. The night temperatures should drop below freezing point, though temperatures around mid 20° C are also conducive for maple trees. The day temperature should be around 40° C, so that the sap can run easily. Cloud cover slows the sap running and snow covering on the ground prevents budding, thus prolonging the sugar season. Maple trees need to be at least 30-year-old, to be tapped for their sap. About ten gallons of sap is produced per season, from a 40-year-old tree. One gallon of maple syrup is produced from 30-50 gallons of sap. The Native Americans call Maple syrup as ‘sweetwater’. The tree is not harmed in any way when tapping the syrup, as only 10% of the sap is harvested from the total tree production of sap.

The bark of Maple trees have astringent properties and are used to treat sore eyes. Cramps and dysentery can be treated with the help of an infusion of the bark. The inner bark when brewed into a tea, can be used to treat diarrhea and cough. The obstructions of the liver and spleen are cleared with the help of a decoction prepared from the leaves or barks of Maple trees. Maple syrup is known as a health food and is used as a substitute for sugar. The wood is used as a fuel and is turned into charcoal commercially. The young shoots are used as whips in France, as they are flexible and tough. The wood of the roots is knotted and used for small cabinet-work. The maple syrup is boiled further to make maple syrup and translucent candies.

Acer palmatum is the biological name of the Japanese Maple trees. This tree is commonly found in Japan and North America. There are over 800 to 1000 different known to exist varieties of this species. This is a favorite tree for Bonsai trees growers. The colors of Japanese Maple trees range from light to dark green and they are also found in every shade of red. They can be light, bright, medium, burgundy and blackish red. You may also find several leaves in the shade of purple. The Japanese Maple tree needs fertile soil, with a little moisture to grow well. ‘Fireglow’ and ‘Emperor One’ are the common varieties that are grown for their fiery, dark red leaves, that look absolutely stunning in the evening light of the sunset. “Corollonium’ is another remarkable variety that has orange pink spring leaf color. This sturdy tree is rarely damaged by pests and is less prone to maple tree diseases. It can grow in a different types of environment.

Acer rubrum or red maple is the most common tree with beautiful, bright scarlet leaves, is found all over the east coast of America. It is found growing in Manitoba and Newfoundland to Florida and even as far as East Texas. The red Maple tree can grow in different types of soil and can even grow on mountains with an elevation up to 6,000 feet. The red Maple is the first to flower in spring and has a short lifespan of only 150 years. These trees reach maturity only after 70 to 80 years of its life. The soft wood is used to make low-cost wood furniture and in wooden crafts. The sap is tapped to harvest small quantities of sap. This shady tree is a source of food for white tail deer and elk. Red Maple is a fast growing tree and is susceptible to many pests and diseases. The gall making maple borer, maple callus borer and the Colombian timber beetle are the worst pests to affect the Red Maple tree. The scaling insects, like the cottony maple scale, the maple leaf scale and the oystershell scale also infest the Red Maple. The gypsy moth, the Liden looper, elm spanworm and the red maple spanworm are known to feed on the Red Maple. These trees can be grown on the front and back lawn and will always prove to be a delightful sight, with their brilliantly colored leaves in fall.

Acer saccharum, commonly known as sugar maple, is found in Nova Sotia to Ontario, Georgia and Texas. It cam reach a height of 82 to 115 feet. This variety of Maple tree is known for its bright yellow or orange to fluorescent red-orange leaves in fall. These trees also have the tendency to color unevenly during fall. Sugar Maple is easily identified by its clear sap found in the leaf petiole. It is a shade-tolerant tree and can germinate as an understory plant. It can be grown in any type of soil, with the exception of sand. This tree is most commonly used as a source of maple syrup.

These are a few Maple tree facts that distinguish these trees from other deciduous trees. Maple syrup is used as toppings for pancakes, waffles, French toast, etc. Maples are the gems of a garden as their colorful leaves always brighten up their surroundings. Luckily, maple tree planting is as easy as taking care of and pruning maple trees. The next time you come across a Maple tree, take time to observe it and soak in the beauty of these cheerful, sweet sap trees.