Learn about the Various Types of Ferns with Pictures 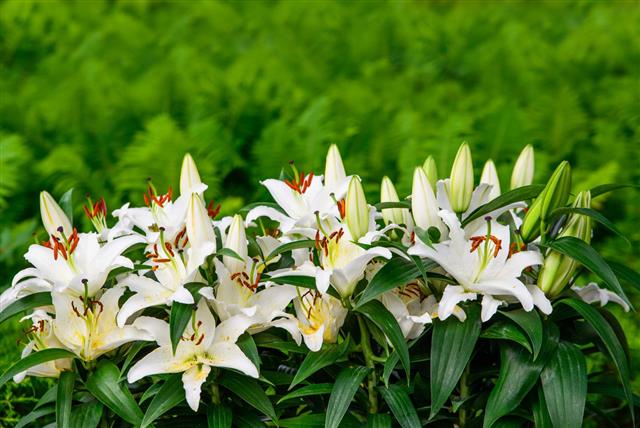 Fossil records say that major families of ferns have been present on land since 350 million years.

A fern is a seedless and flowerless plant that reproduces through spores. It has a rhizome from which roots spring downward and fronds grow upwards. Ferns belong to the division Pteridophyta, which has lower vascular plants. Vascular plants have vessels to circulate water and other fluids. They have fiddleheads that go on to become fronds of the fern. These fronds look like feathers, which give a decorative look to the plant. Hence, they are popularly used to adorn a garden or the indoors of a house.

In this article, we get you informed about indoor and outdoor ferns.

There are some ferns that able to tolerate heat and drought, some are found in the rainforests, while some required shady areas. You need to look into these requirements before choosing a particular type of fern for your surroundings. The following section does the needful by giving you brief details along with beautiful pictures of the following:

These kinds of ferns have fronds with dark green leaves, a glossy texture, and prickly edges like holly. Two common species that are commonly known as holly fern are Cyrtomium falcatum in the genus Cyrtomium and Polystichum lonchitis in the genus Polystichum.

Holly ferns are drought-resistant and deer-resistant.

It is also known as a sword fern, and its scientific name is Nephrolepis exaltata. It has arching feather-like, dark green fronds. It is a popular houseplant especially planted in hanging baskets. It requires bright or average light, sufficiently high humidity, and it thrives in temperatures ranging between 60 to 75°F. It does not grow well in lower temperatures, and hence, it should be kept indoors in winter. For a dense foliage, misting the fern (i.e., spraying it with water) is advisable. This fern can be reproduced through runners, i.e., branches or stems. It procreates naturally through spores.

Maidenhair ferns are those ferns that grow on land, with sizes ranging from small to large, belonging to the genus Adiantum. Their fronds are delicate, branched out like palms, and are waxy (i.e., water drains away from their surface). In nature, these ferns abound in moist areas like places around streams, rivers, ponds, lakes, and waterfalls. They can be grown indoors, but require a lot of care as they require high humidity. At the same time, their leaves cannot tolerate misting. Also, they should not be exposed to direct sunlight.

Staghorn ferns belong to the genus Platycerium. The fronds of this type of fern appear like the antlers of a stag. It also has basal leaves (leaves that arise directly from the root or a root-like stem), and these leaves do not take part in reproduction and eventually turn brown. The antler-like fronds have spores that are responsible for reproduction. If provided with moderate moisture and humus-rich medium, they can be grown indoors.

The scientific name of ostrich fern is Matteuccia struthiopteris. It is a plant native to North America. It grows well in zones 3 – 7. It has decorative fronds that grow in clods that look like tail feathers of an ostrich, but they are sterile. They grow to a height of about 3 to 6 feet. It also has shorter fronds, just about 12-20 inches high that grow later, and they have spores that are responsible for the reproduction of the plant. Moist soil and shade are favorable conditions for this fern to grow. Adding fertilizers to the soil where they grow and moderately watering it during drought is advisable.

Its scientific name is Athyrium niponicum var. pictum, f. metalicum, and it belongs to the genus Athyrium. Its leafage is an eclectic mix of dark bluish green fading out to silver at the edges, and its stalk is reddish-purple in color. Being a deciduous plant, it sheds its leaves in winter; however, it can survive in a temperature as low as -30°F. It grows to a height of 8 to 12 inches. It should be planted in moist soil. It should also be given moderate shade and some humidity.

The species Cyathea australis, Cyathea cooperi, and Dicksonia antarctica are referred to as the Australian tree ferns. These varieties grow very tall, resembling a tree as suggested by the name, to a height of about 30 feet, their fronds are about 8 ft long, and the circumference of their trunk is about 6 inches. They require a lot of moisture and enough water, but the soil around their roots must not be watered in excess. A little shade and morning sunshine are ideal conditions for them.

Plants belonging to the genus Asparagus, like Asparagus aethiopicus, Asparagus densiflorus, Asparagus plumosus, Asparagus setaceus, and Asparagus virgatus, are commonly referred to as Asparagus ferns. Although the name, it is neither a fern nor is it edible; in fact, it is poisonous. It is a member of the Liliaceae (lily) family, and thus, it is distantly related to onions, garlic, and lilies, and also directly related to the edible asparagus. It is a decorative plant. It seems to have prickly leaves resembling needles, but they are actually modified stems called cladodes, which perform photosynthesis. The more light they receive, more prolific is their growth. These plants are adaptable and can multiply to cover the whole garden with little care, so keep them in check.

Cinnamon fern has the scientific name Osmundastrum cinnamomeum. It has two types of fronds: cinnamon-colored feathery fronds at the center, and green, leafy ones surrounding them. The cinnamon-colored fronds are fertile, and the green, leafy fronds are sterile. To grow well, they require moderate coolness and moisture. They do not require a lot of care; just moist soil, some fertilizers, and pruning from time to time is essential.

The bird’s nest fern includes a variety of ferns belonging to the genus Asplenium. Asplenium antiquum, Asplenium serratum, Asplenium nidus, and Asplenium australasicumare the species that are commonly referred to by this name. This kind of fern is an epiphyte (a plant that derives moisture and nutrients from the air and rain; usually grows on another plant, but not parasitic on it) in its natural habitat. It can be grown in pots in your garden. It should be kept in the shade, away from direct sunlight, and should be provided with enough humidity.