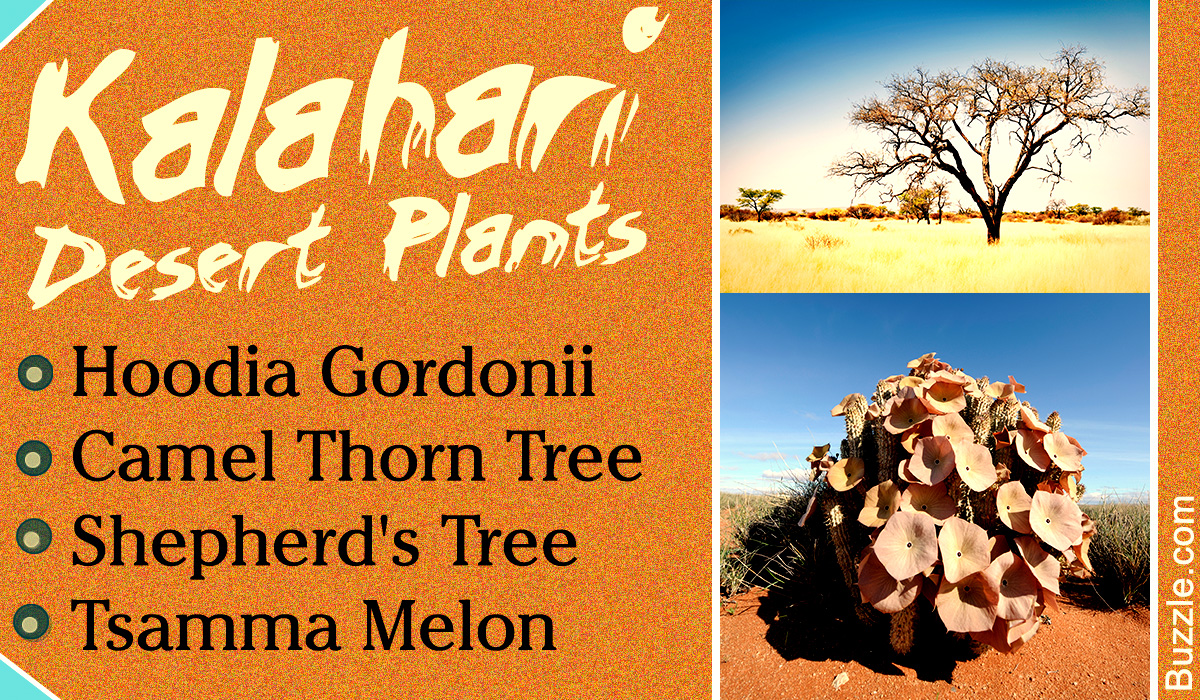 The word ‘Kalahari’ is derived from the Setswana (a language spoken in southern Africa) word kgala, meaning great thirst. The Kalahari desert covers the central part of southern Africa, and covers large areas of South Africa, Botswana, and Namibia. It is surrounded by the Kalahari basin, and the only major river flowing through the area is the Okavango.

The terrain in the Kalahari is dotted with ancient lake beds, that have now run almost dry. This semi-arid desert is covered with red sand and lacks a permanent source of surface water. Rainfall is scanty, and parts of the desert are drained by the salt pans of Makgadikgadi and Etosha. In spite of harsh weather conditions, Kalahari desert exhibits a wide variety of plant and animal species. The vegetation mainly consists of dry grasses and shrubs, and a few species of Acacia and thorned trees, which have adapted well to the arid landscape. Described below in greater detail are the most commonly found plants in the Kalahari desert.

Plants Found in the Kalahari Desert

Sometimes referred to as Hoodia cactus, the actual name of the plant is Hoodia gordonii. Though it shares many similarities with cactus, it does not belong to the cactus family. Very well adapted to dry climate, this barbed succulent is leafless, and is widely used in southern Africa for its medicinal purposes. Pollination of flowers is usually carried out by flies, and its flowers have an unpleasant, decaying meat odor. The natives of the region, mainly the San Bushmen, make use of this plant to treat a variety of digestive and gastrointestinal problems and to suppress appetite and thirst.

Belonging to the genus Acacia, camel thorn tree (Acacia erioloba) is endemic to southern Africa. This spiny tree can grow as high as 17 meters, and hence it’s a favorite with giraffes, which are found abundantly in the Kalahari. With their long necks and specially adapted tongues and lips, they can easily reach up to and eat the succulent, fleshy leaves of the camel thorn, which other animals cannot. The sharp thorns of the tree prevent animals from over-grazing. Weaver birds build large over-sized nests in these trees, even as big as 2 meters. The tree also bears gray, kidney-shaped, seed-bearing pods, which are a staple diet for cattle. The pods are collected and the seeds are used commercially to feed livestock because of their high nutritional value. The seeds can also be used as a substitute for coffee beans, after crushing and roasting them. The dark reddish-brown wood of this tree also has many uses, being very strong and drought-resistant. It is used in constructing poles, fences, and houses, and it is also used as firewood. The root system is also well-developed and reaches deep into the earth.

Known locally as matoppie and witgatboom, shepherd’s tree (Boscia albitrunca) can attain a length of 8 meters. This slow-growing tree is commonly found in the Bushveld and Lowveld regions of southern Africa, and thrives in the dry and salty, low-lying areas. The trunk is sturdy and white, and may have patches of gray or black bark. The wood is used in the preparation of kitchen utensils by the native people. The tree bears a dense evergreen foliage, with the leaves forming a big canopy over the top, with intertwining twigs and leaves. The leaves are thin, narrow, and stiff with a leathery texture, and taper towards the base. The veins of the leaf are quite indistinct, except for the midrib. They are a source of nutrition for antelopes, giraffes, and other animals, being very high in vitamin A and protein content. The shepherd’s tree produces small, star-shaped yellow flowers, with a sweet scent, which are also a food source for animals. The tree also has round fruits, which turn yellow on ripening, and measure even less than an inch. It is used to treat patients who suffer from epilepsy. Like the camel thorn, the roots of this tree also reach deep into the ground. The root powder is considered edible and used to make coffee and porridge.

Known by various names like gemsbok cucumber, African horned cucumber, hedged gourd, and kiwano, the horned melon tree belongs to the cucumber and melon families. Native to southern Africa, this tree is famous for its fruit, the kiwano, which resembles a spiny, oval melon. The plant is an annual creeper and thrives in warm climates. A single creeper can produce several fruits, and these in turn act as support for the vine and tendrils to spread further. The leaves and stems have a layer of fuzz. The fruit is considered a delicacy, and can be eaten both raw and ripe, and is also used in cooking. Its taste is a blend of cucumber and banana. It is beneficial for health with a high content of fiber and vitamin C.

Also known as citron melon, this plant is endemic to the Kalahari desert. It is used extensively as food by the tribes living in the desert, and as a source of water because of its high water content. The leaves of this plant are lobed and abrasive to touch. It bears single, large yellow flowers. The flesh of the citron melon is white and hard; and thus the fruit is often cooked prior to consumption.

The Kalahari desert has a diverse ecology. But plants like the Hoodia gordonii are threatened by illegal trade since there is ongoing research about its medicinal properties all over the world. The dry seasons see a rise in drawing water from the earth by boring deep underground holes, which adversely affects the plant life. These plants can survive in very specific conditions, and care must be taken to see that human actions do not disturb the delicate balance of nature so that the biological diversity of the desert is maintained, and continues to flourish.