When you think of weeds, all that comes to mind are thorny, ugly-looking plants that ruin your garden landscape. However, the lantana plant is a unique weed that bears clusters of beautiful flowers. It was originally cultivated due to its pretty blooms as an ornamental plant; however, due to its aggressive weed-like growth and toxic nature, it is now classified as a weed. 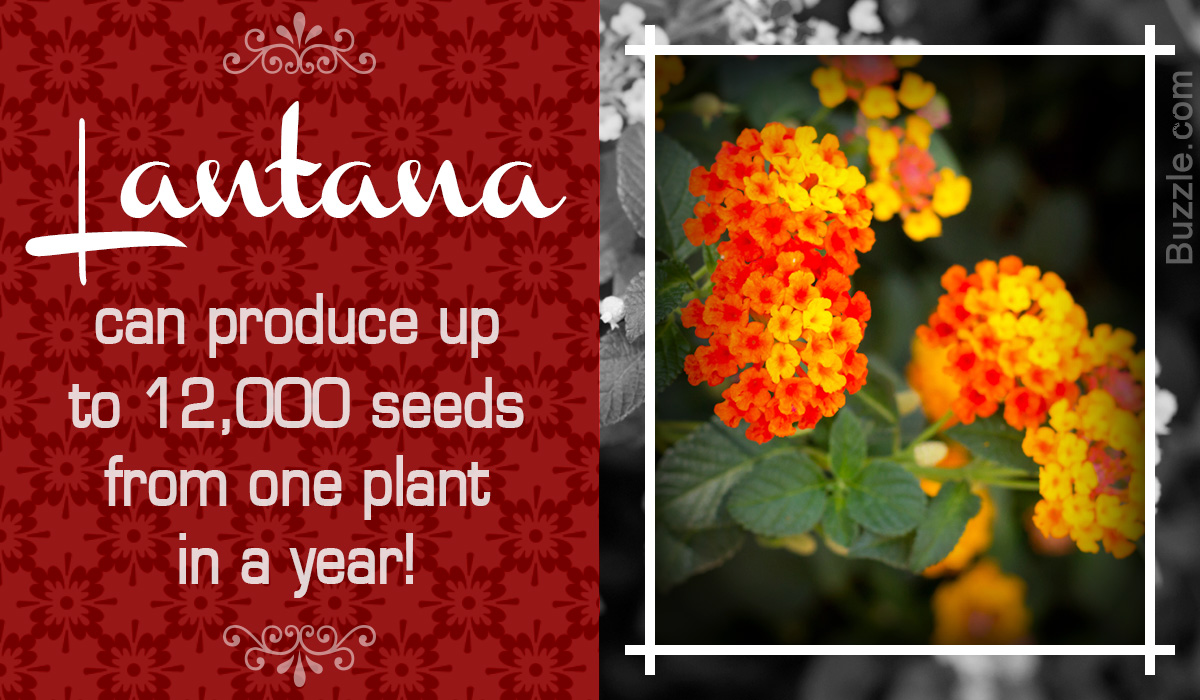 When you think of weeds, all that comes to mind are thorny, ugly-looking plants that ruin your garden landscape. However, the lantana plant is a unique weed that bears clusters of beautiful flowers. It was originally cultivated due to its pretty blooms as an ornamental plant; however, due to its aggressive weed-like growth and toxic nature, it is now classified as a weed.

In the Victorian era, flowers held a place of significance, and each flower had a special meaning. The flowers of the lantana plant symbolized rigor.

The lantana plant is one of the most popular annuals used in gardens. They are favored because their blooms are long-lasting, they are easy to grow, and they thrive in most soil conditions. Deadheading is carried out to encourage continuous blooming and to prevent the growth of the berries. Some of the cultivated varieties (cultivars) of this plant grow to as much as 5 – 6 ft in height, forming large, bushy mounds, while others stay low and spread, reaching up to 4 ft in width, but only 1 – 2 ft in height. 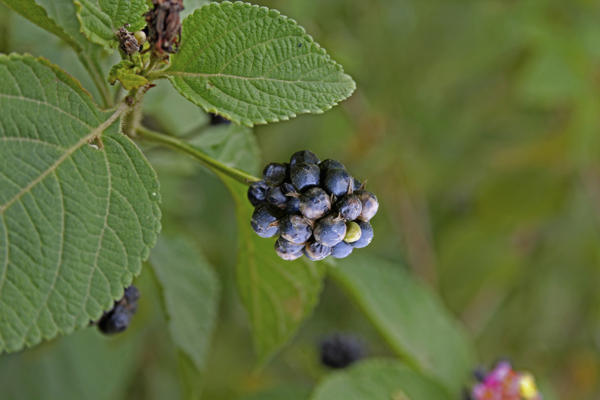 Lantana is a genus consisting of more than 150 species of flowering plants in the Verbena family. The clusters of flowers borne by the lantana plants, called umbels, are a mix of red, orange, yellow, or blue and white florets. The flowers typically change color as they mature, resulting in a multicolored inflorescence. The flowers mature into toxic berries, which start off as green and turn black as they mature.

Growing and Caring for a Lantana Plant 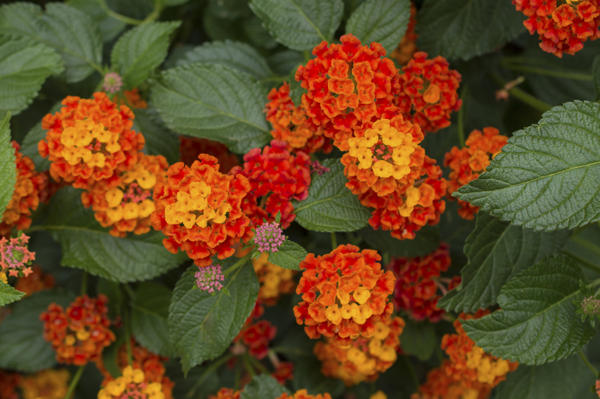 It grows up to 3 ft tall, and has orange, yellow, and red blooms that turn deep red. 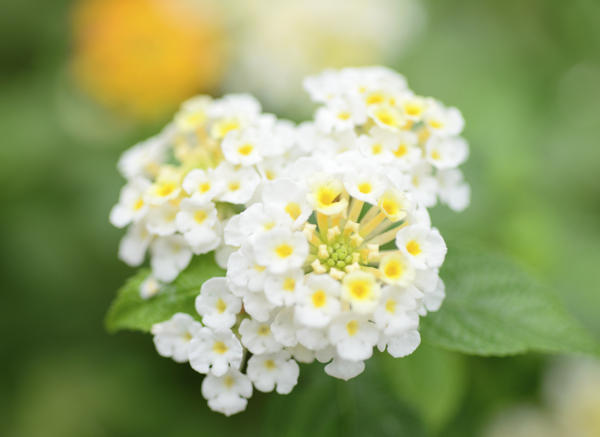 It is a tall, sterile, and white flowering variety. The flower centers are a clear lemon yellow. It attains a height and width of up to 5 ft. 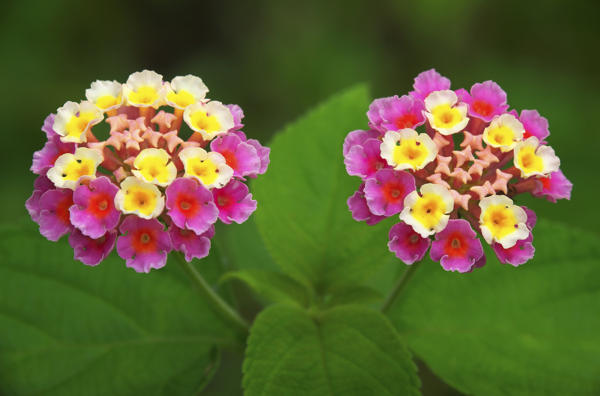 It forms an upright mound up to 3 ft tall. The flower buds are magenta, opening to deep rose-pink and yellow. 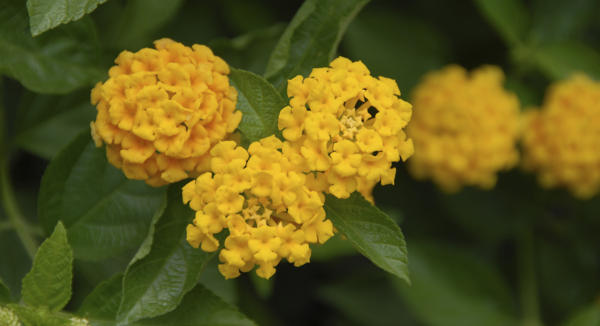 It is very similar or the same as Gold Mound. It is a vigorous spreading plant that reaches up to 2 ft tall and 4 ft wide. This is a heavy-blooming cultivar with deep gold, sterile flowers that do not mature into berries. 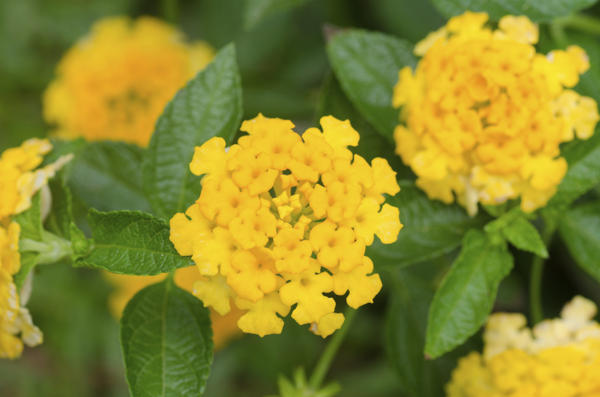 It has a dark green and chartreuse variegated foliage with bright lemon yellow flowers. It is the same as Lemon Swirl. Plants grow 2-3 ft tall and 4 ft wide. It is a sterile cultivar that does not produce berries. 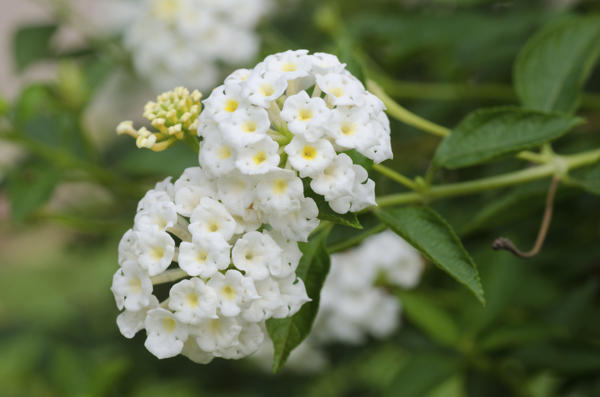 It is low spreading with pure white flowers. 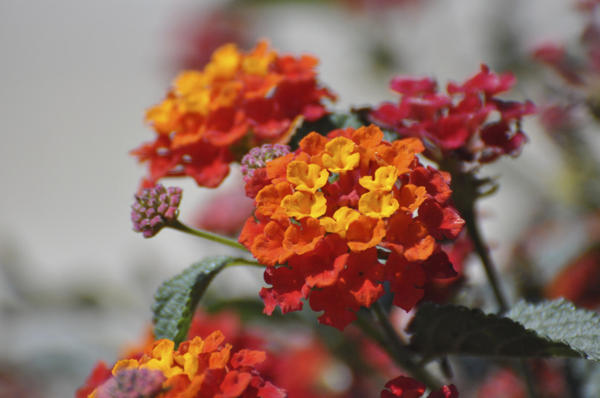 It is a tall upright cultivar growing 4-5 ft tall and wide. Flowers are orange-red. 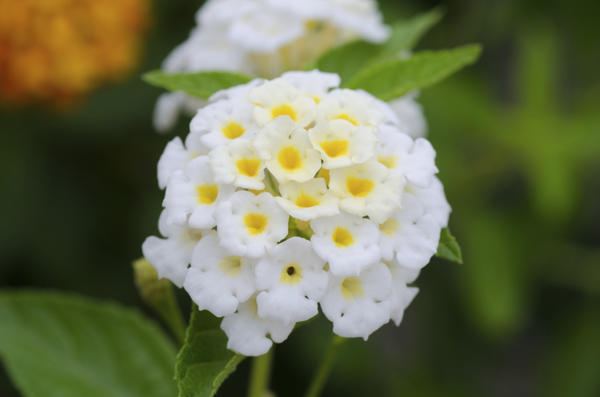 It is a spreading cultivar with creamy white flowers that have a gold eye. It does not usually produce berries. 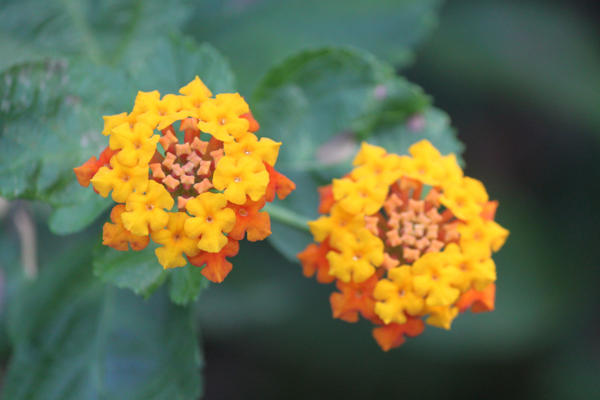 It grows to only 12″ tall and 12″ wide. The blooms begin as orange buds that open bright yellow, and change to bright orange. 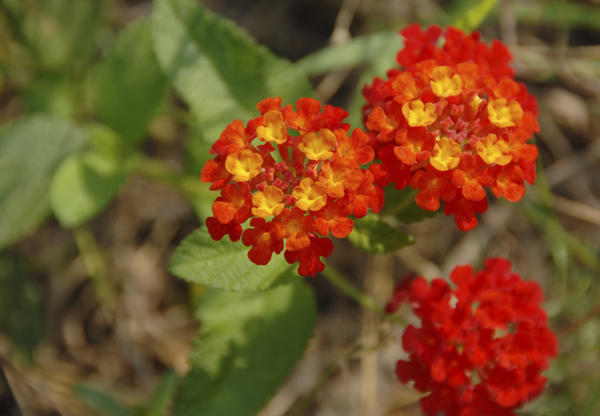 It is very similar or the same as Dallas Red. The flowers are orange, yellow, and crimson. This cultivar is the reddest lantana available. 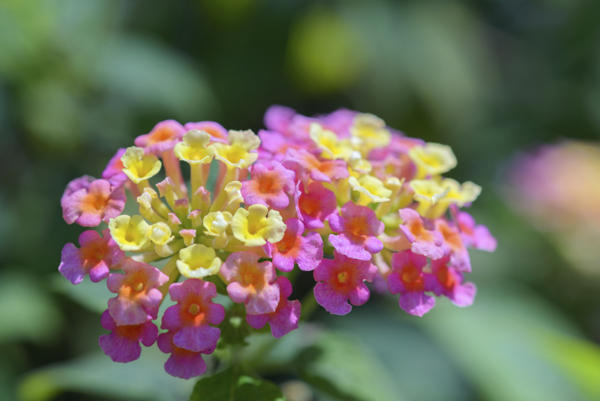 It is a newer variety with pastel-colored, sterile blooms of rose pink and canary yellow apricot. This is a vigorous growing mounding type that attains a height and width of up to 5 ft. 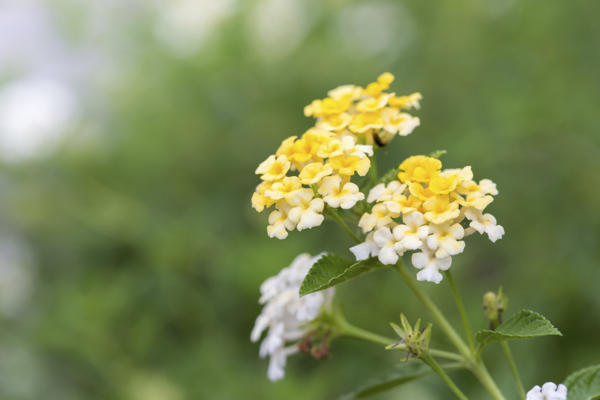 It is a small cultivar that grows only 12″ tall and 24″ wide. Flowers are white and yellow in color. 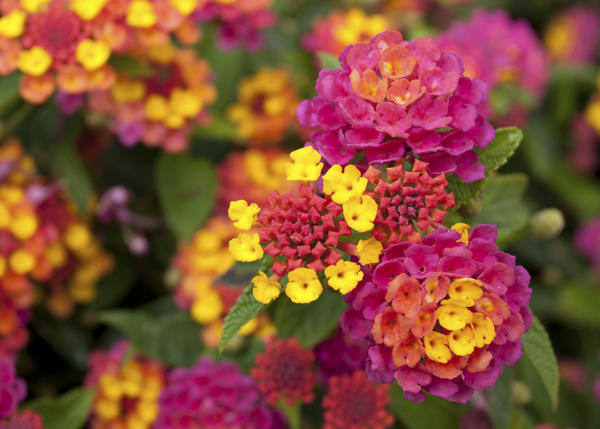 It grows 3 ft tall and wide. Flowers are orange, gold, pink, and coral. 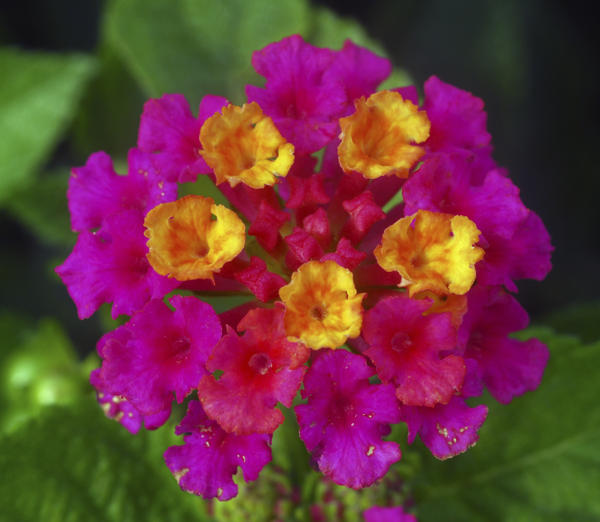 It grows to only 12″ tall and 15″ wide. This cultivar is the same as Confetti. It is extremely free flowering, and the flowers open chiffon yellow, and then change to orange and fuchsia-pink. 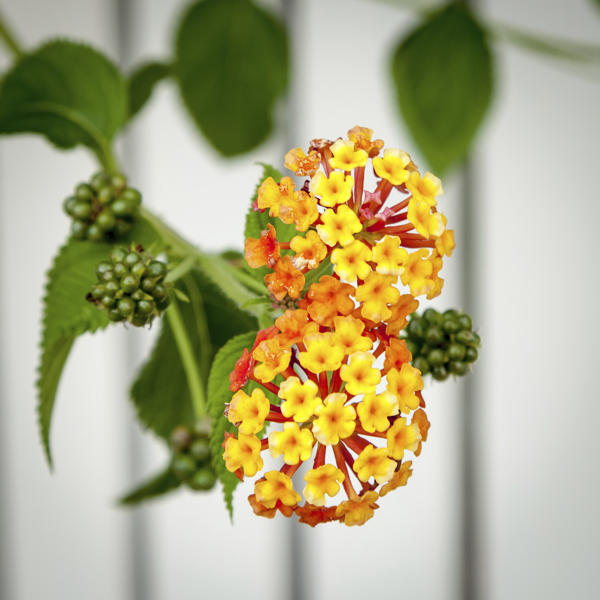 It is similar to Miss Huff in size and hardiness, but the flowers are softer in color, sterile, and vary from pale yellow to peach and soft pink. 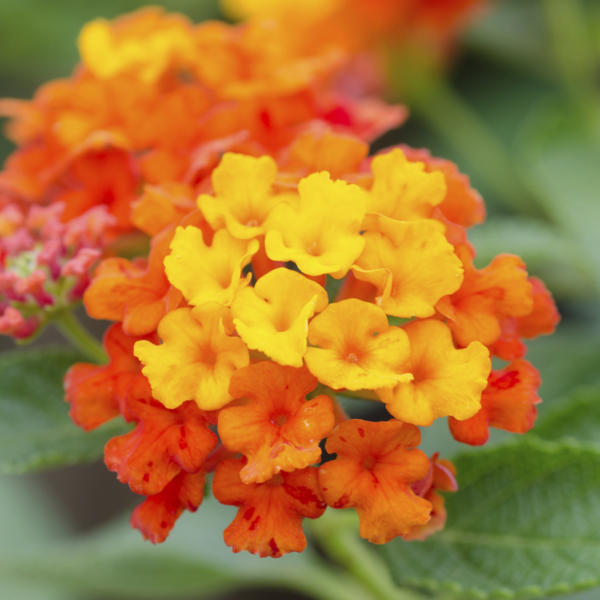 It forms an upright mound that’s up to 5 – 6 ft tall. Flowers are sterile, and a mix of orange, coral, and gold. 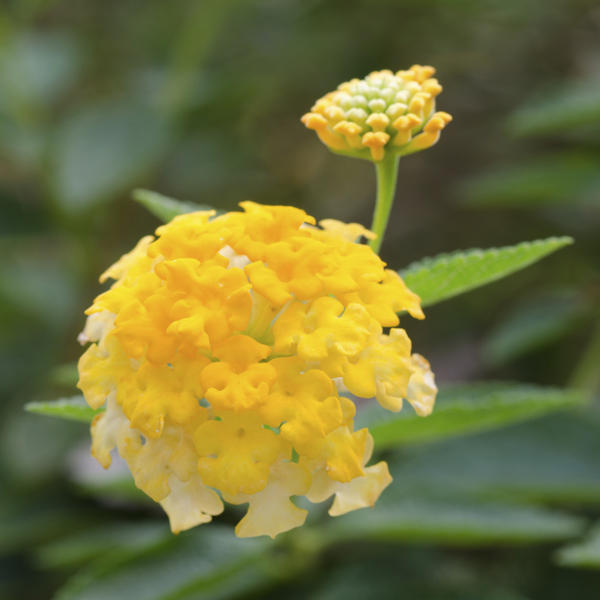 It spreads up to 2 ft tall and 3 ft wide with pale pink, butter yellow, and ivory flowers.

♠ The leaves are poisonous to most animals.

♠ They are native to the tropical regions of North and South America and Africa.

♠ In Australia, lantana is regarded as one of the worst invasive weeds, as it spreads quickly and takes over other plants in the area.

♠ It has been used in traditional folk remedies to treat skin conditions, stress, and high blood pressure.

♠ The endangered mahogany glider (Petaurus gracilis) species is at risk from lantana invasion.

♠ It can tolerate fire by regenerating from basal shoots.

♠ The leaves work as a soothing agent in cases of insect stings, skin eruptions, cuts, scrapes, ulcerations, the itch of measles and chickenpox, and also in case of parasites such as scabies.

♠ Lantana is mentioned in folklore as being of help in snakebite cases.

♠ The leaves, dried and burned, have been used for centuries as a natural mosquito repellent.

♠ A mild tea made from the leaf is used in the Caribbean Islands to ease cold symptoms.

♠ The ripe berries are used to make jam, jellies, pies, and cordials in Ecuador.

♠ It is a cousin to the American Beautyberry.