White Pine Tree Information That No One Ever Gave You Before

Eastern White Pine or the White Pine tree belongs to the genus Pinus strobus. This large pine is native to the eastern slopes of North America, spanning across the region flanked by Newfoundland, Minnesota, Manitoba, the Appalachian Mountains and Georgia. 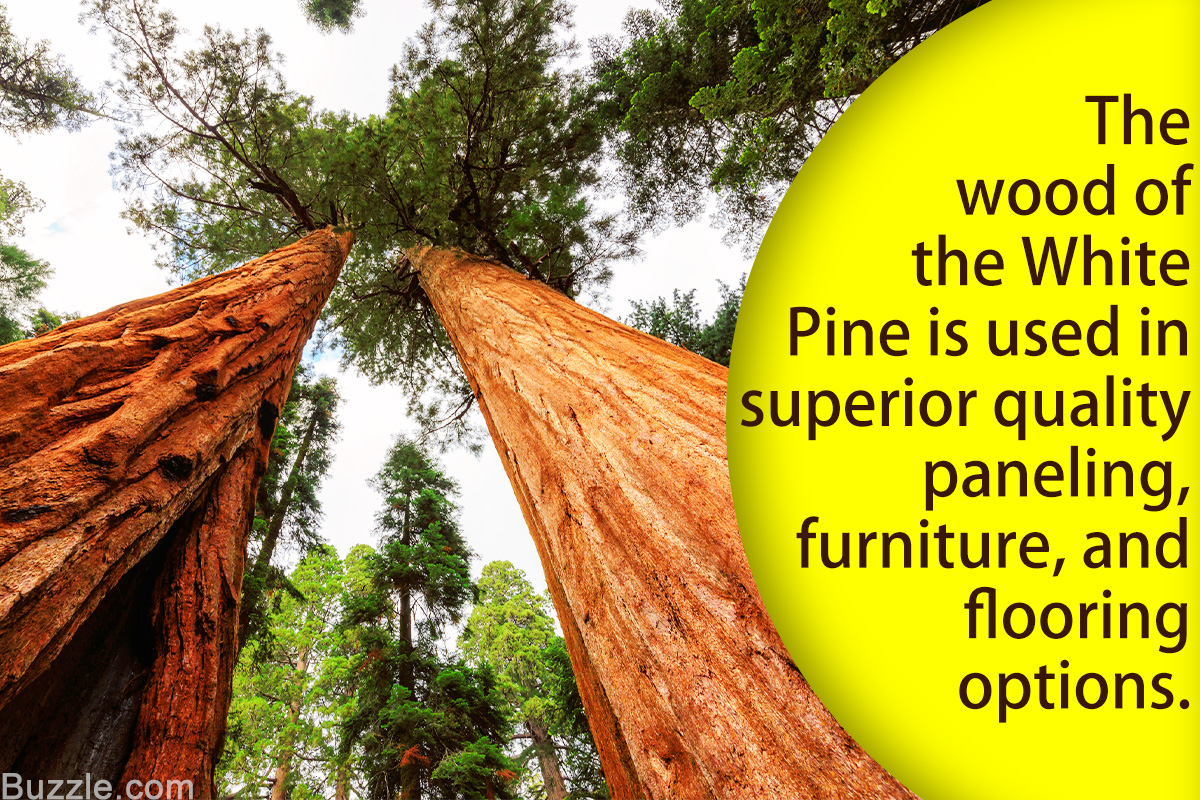 Eastern White Pine or the White Pine tree belongs to the genus Pinus strobus. This large pine is native to the eastern slopes of North America, spanning across the region flanked by Newfoundland, Minnesota, Manitoba, the Appalachian Mountains and Georgia.

The White Pine tree is also referred to as the Northern White Pine, Soft Pine, Weymouth Pine and Tree of Great Peace. The last epithet is awarded to the pine tree group by the Haudenosaunee Native Americans. The tree bears leaves in fascicles of four or five and flaunts a deciduous sheath. They are bluish-green in color and finely serrated. While the mature White Pine trees are known to ideally live up to 250 years, there are specimens that are over 400 years!

In 1620, Captain George Weymouth imported the species into England. But the trees succumbed to the White Pine Blister Rust disease and did not survive as the desired ‘future timber crop’.

There was a time in colonial history, when the White Pine was reserved for the British Royal Navy and the king actually marked the trees by blazing a broad arrow on the trunk declaring them to be the ‘Kingstrees’!

White Pine were extensively transported to Britain aboard barge-like vessels. The masts that adorn the US Constitution (Old Ironsides) were actually designed from single trees and laminated to withstand cannon ball impacts. This practice was another source of friction between the English and the colonials. All through the American Revolution, the favorite indulgence of the patriots was to see how many Kingstrees a single man could ax and haul.

White Pines thrive in cool, humid climate. They require well-drained soil of the rocky highlands, but also thrive in boggy areas. The tree is nature’s home for the Common Crossbill and squirrels.

The White Pine is easily the tallest tree in all of eastern North America.

White Pine are known to attain a height of around 230 ft! They grow well in the southern Appalachians and in specially protected areas such as the Great Smoky Mountains National Park and regions developed by the Eastern (White Pine) Native Tree Society in Ontario, Michigan, Minnesota, Illinois, Pennsylvania and North Carolina. Research reveals that the White Pine is now even naturalizing along the mountain slopes of the Czech Republic and southern Poland.

The tree flaunts diameters that range from 1 to 1.6 m and total trunk volumes of approximately 1,000 cubic feet. It is naturally resistant to fire and hence mature survivors can be reseeded even in burned areas. Sadly, the White Pine suffers the onslaught of deterioration brought on by the presence of the white pine weevil or Pissodes strobi and the White Pine Blister Rust.

White Pine Blister Rust, also botanically referred to as Cronartium ribicola, is a fungus growth that is known to damage the White Pine.

White Pine Blister Rust exposes the pine tree to a mortality rate between 50 and 80%. During the era rife with sea voyages, the White Pine was extensively felled for its high quality wood that was used to make the masts and keel of ships.

The White Pine is now preserved via plantation forestry. There are several cultivars now developed exclusively for private gardens and even bonsai varieties for lands that can support the slow growth of the White Pine. The species are popular for the knot free, ‘board’ timber provided.

The wood of the White Pine is known to aid the designing of superior quality paneling, furniture and flooring options. The versatility of the tree lies in the ability of the timber to be processed even a year or more after being felled, unlike the timber off hardwood trees such as oak, maple and ash.

The timber of the White Pine appears creamy white when freshly cut and takes on a deep rich tan with every passing year. The timber is also known to flaunt reddish-brown and yellowish-golden hues. Genetic factors and weather and soil conditions play a vital role in color development and the health of the timber.

The vitamin C content in the White Pine needles is now being sought to make tisane. The cambium of the White Pine is edible and an excellent source of resveratrol, a natural antioxidant, antimutagenic, and anti-inflammatory.

White Pine is adapted to a variety of uses and has been one of the most valuable lumber trees.

White Pines can be found from sea level in its northern range to 5000 feet in the Appalachian Mountains.

Mature White Pine trees survive most surface fires due to thick bark making them fire-resistant, branch-free trunks, though younger trees are not as fire resistant.

White pine is the only five-needle pine native to eastern North America and reaches maturity at 150 – 200 yrs, while some are reported to be 450 yrs old. It is the state tree of Maine and Michigan.