Sandy loam soils are popularly known for their excess water-drainage property as well as nutrient content. They are considered to play a very important role when it comes to the healthy growth of plants in a garden. Gardenerdy presents two easy procedures to make this soil. 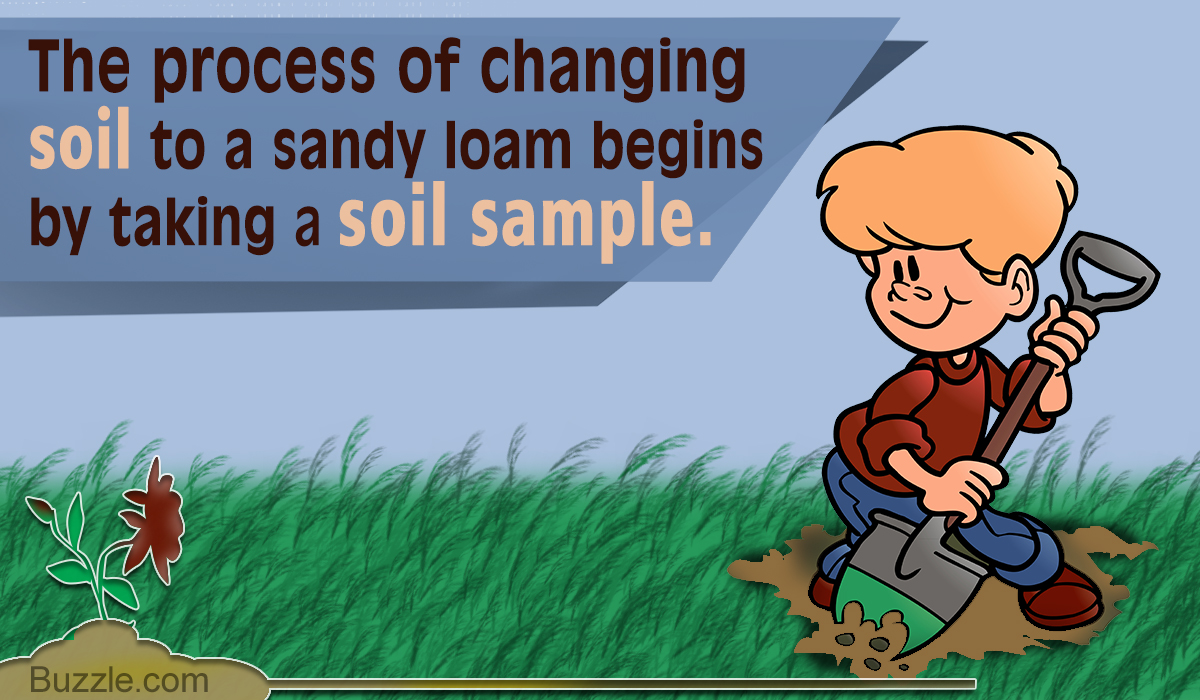 Sandy loam soils are popularly known for their excess water-drainage property as well as nutrient content. They are considered to play a very important role when it comes to the healthy growth of plants in a garden. Gardenerdy presents two easy procedures to make this soil.

If you are fond of gardening, then you surely must be aware of how important soil is for any garden to flourish. Since the plants get water and nutrients through soil, it is considered to be a lifeline for plant growth. The soil in your garden can be changed to sandy loam soil by making a few amendments to the original soil. This soil is inexpensive and easy to make.

Sandy loam is made up of two components: Sand and loam. While sand is coarse-grained and drains most of the water, loam retains some amount of water in this type of soil. This soil has dark reddish to brown color, and is coarse-grained in nature. The greatest advantage of sandy loam is its airy texture, which allows oxygen to penetrate deep into the soil until it reaches the roots of the plants. Plenty of oxygen boosts plant growth. Given below are two methods with detailed instructions for making this soil.

How to Make Sandy Loam Soil

Method I (For Beginners)

Procedure
Step #1: Taking the Soil Sample
Soil sample can be taken by digging one hole, each having a depth of about 5-9 inches. The soil sample must not be more than an inch wide.

Step #2: Perform the Jar Test
Fill ⅔ of the quart jar with water. Pour the soil sample into this jar. Close the lid tightly. Mix the soil and water by shaking the jar well. Place it on an even surface for about 1½ days to allow the soil particles to settle down. The layers from the top to bottom will be clay, silt, and sand.

Step #3: Marking the Levels
Stick 4 strips of paper at four different places on the bottle. About two minutes after shaking the jar, mark the layers on the first strip by measuring with a ruler. Similarly, mark the observations on two more strips after an hour and 5 hours, respectively. The last observation should be marked on a strip after the completion of 2 days.

Step #4: Calculation of Layer Heights
Once the observations have been marked, calculate the space between the soil layers and the total distance from the bottom of the jar to the topmost layer of soil. Compute the percentage of each of the components such as sand, silt, and clay in the soil.

Step #5: Appending the Soil
Measure the soil to be converted with the help of a 1-gallon container. Look for any stones, rocks, or roots of plants, and remove them. Add the required amounts of sand and organic compost to the soil in order to have the same composition as that of a sandy loam, which has at least 60% sand in it. If the soil has 30% sand content, at least 30% sand needs to be added for converting it to sandy loam.

Step #6: Test the Mixture
On appending the soil, it is important to verify that all the resultant soil has the composition of a sandy loam. To check this, perform the jar test on a 1-inch sample of resultant soil.

Tips
➤ The water taken for the jar test must be clean. Ensure that the jar is still at all times during the test.
➤ Sandy loam soils contain at least 60% sand by volume. This principle should be kept in mind while adding sand to the soil.

Procedure
Step #1: Taking the Soil Sample
Soil sample can be taken by digging 4-5 holes, each having a depth of about 5-9 inches. The soil samples taken need not be more than an inch wide. Next, these samples are to be mixed. On mixing, make sure you separate any boulders, stones, or roots of plants from the soil sample before sending it for testing.

Step #2: Getting the Soil Sample Tested
Soil sample collected must be poured into a quart jar. This sample needs to be tested in order to determine the characteristics of the soil. Once the soil sample is ready, get its pH level and nutrient content checked at a nearby agricultural testing center.

Step #4: Adding Sand and Nutrients
Mix the organic fertilizers and compost into the soil to be converted to sandy loam. Add sand in the proportion of 50 lbs sand per 100 sq ft of soil. Add some sawdust powder to the soil and mix well.

Step #5: Adding Organic Matter
Finally, add a thick layer of organic matter, and handsome amount of water above this organic layer, and allow this matter to decompose, thus making the soil nutrient-rich.

Tips
➤ Soil must be efficiently tilled on adding sand or nutrients. However, the soil to be tilled should be dry. Wet soil, on tilling, forms lumps.
➤ This process is expedited when the layer containing organic matter is covered with a plastic, preferably black in color.
➤ Always dry the soil before sending it for nutrient level or pH-value testing.

Though the process of putting up the sandy loam soil together seems quite easy, we need to ensure that the components are mixed in correct proportion. However, customizing soil as per your requirement is more beneficial than buying a ready-made soil mixture.