How to Grow and Care for a Creeping Myrtle (Vinca minor)

The short evergreen creeping myrtle plant is resistant to droughts, deer, and pests. It takes very little to care for the plant. Gardenerdy explains how it can be a solution for hard-to-grow areas. 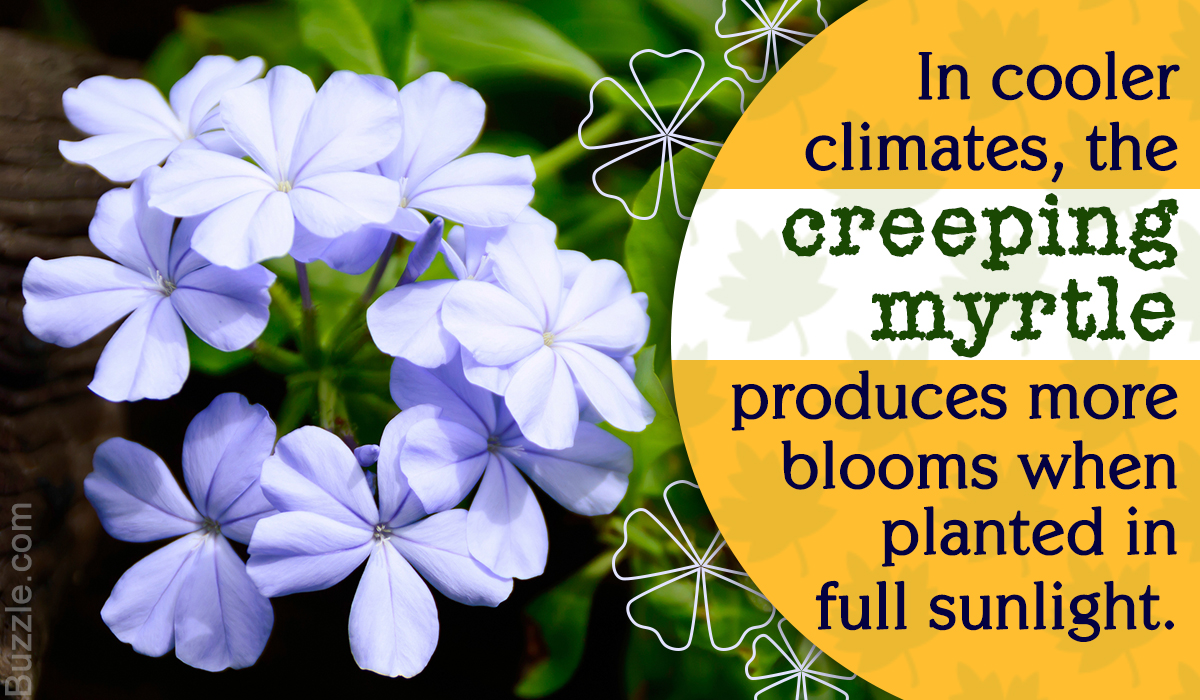 The short evergreen creeping myrtle plant is resistant to droughts, deer, and pests. It takes very little to care for the plant. Gardenerdy explains how it can be a solution for hard-to-grow areas. 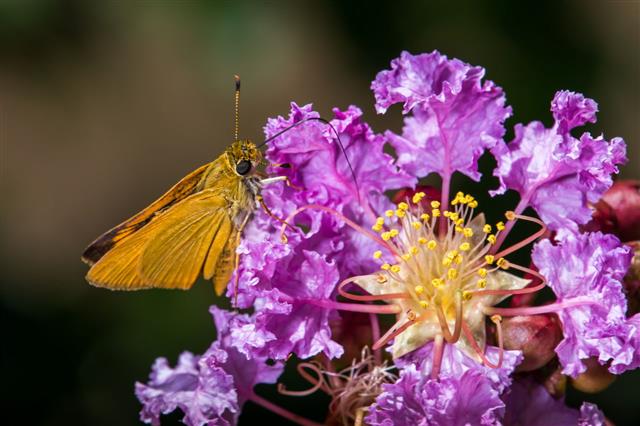 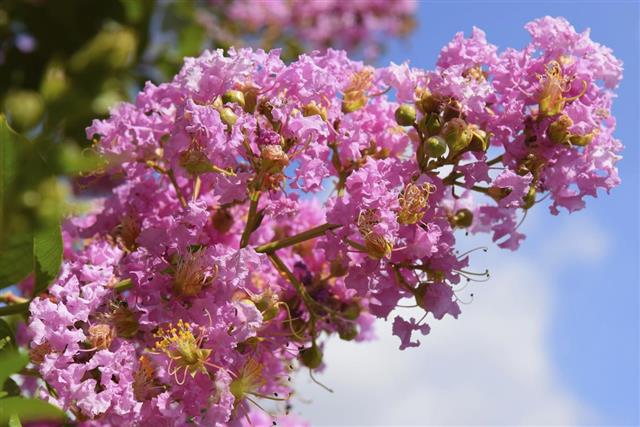 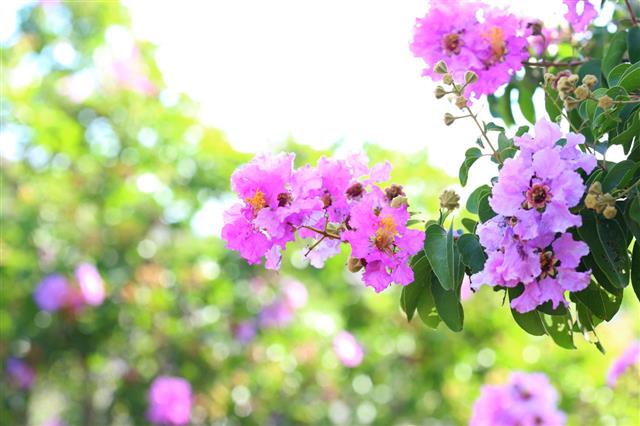 In medieval times, Vinca minor was called ‘Flower of Death’ as it was woven into bands made for dead children. People used to plant it on the graves of infants. Crowns for criminals on the way to execution were also made from these flowers.

Creeping myrtle or Vinca minor is a trailing flowering plant, and is commonly grown as a groundcover in temperate regions. This perennial plant is known for its beautiful small purple flowers and shiny dark green foliage. The plant is commonly known as lesser periwinkle, dwarf periwinkle, small periwinkle, common periwinkle, or just ‘myrtle.’ This short woody plant (dwarf shrub) is native to central and southern Europe. It was first introduced into North America in the eighteenth century as an ornamental plant. However, it has escaped cultivation and has started invading natural areas throughout the eastern United States. It can survive, grow, and reproduce on its own. It is often seen growing on forest floors, edges, and roadsides.

Many flowering plants do not thrive when planted under a tree. However, creeping myrtle under trees spreads like a wildfire. It is a great groundcover under trees where grass won’t spring up. So, you can easily grow V. minor, particularly in those areas where you cannot grow a lawn. The vines can easily fill the shadowy spaces under trees, they can settle down on slopes, and can grow well even in clay or sandy soil (poor soils).

There exist various cultivars of creeping myrtle, for example, Bowles, which produces large dark purple flowers sporadically throughout the growing season, and Illumination or variegated vinca, with creamy white-and-green, gold, or yellow variegation of the foliage. Alba produces white flowers while Atropurpurea produces reddish-purple blooms. Sterling comes with silver-gray and green leaves and blue flowers. These plants are grown in U.S. Department of Agriculture plant hardiness zones 4 through 9.

➺ The twining stems are slender but somewhat woody.

➺ The shiny green oval or lance-shaped leaves are thick and somewhat leathery. They are placed opposite along the stems. However, they are clustered at stem terminals.

➺ The vine has mat-forming stems that grow 6 to 12 inches tall. The trailing stolons can be up to 3 feet long. The vine grows vigorously and can cover large areas of ground.

➺ Star-like, 1-inch-wide, five-petaled solitary blue flowers bloom for one month in spring (April-May). They bloom sporadically from June to September. The petals are fused (pinwheel-like).

➺ Roots develop where stems touch the ground. The plant spreads through rhizomes.

➺ Fruits (if they develop at all) are brown, slender, bean-like, and inconspicuous.

➺ These plants are easily available in the market. You can purchase some healthy ones and plant them about one and half feet apart. Being a hardy plant, it will tolerate planting through various seasons, but spring and early fall are considered as the best times to plant myrtle.

➺ Transplanting creeping myrtles into beds and borders is very easy. Mulch at transplanting. You can grow these evergreen plants in pots as well.

➺ In cooler climates, plants planted in full sun will produce more blooms, however, in other areas, the plant won’t be able to tolerate full sun. Exposure to full sun can lead to decreased vigor and chlorotic foliage. It is better to plant it in partial shade.

➺ The plants would naturally perform best in fertile, evenly moist, and well-drained soils. They would be able to thrive in poor soils and soils of various pH as well. Well-established plants can even tolerate an occasional drought.

➺ See to it that the soil is evenly moist. Water the plants regularly for the first season of establishment. This will promote the development of roots at the nodes of the trailing stems and settlement of new roots.

➺ To control the growth, plants should be pruned once every year. Older branches may be cut back to about 4 inches high in early spring. Pruning in early spring will stimulate new growth. Rub some alcohol on pruning shears and use these sterilized shears for trimming the plants. You may have to dig out the plants that have spread beyond the boundaries of the planting area. Place the plant debris in a trash, it should not resprout.

➺ If you have large, established beds of creeping myrtle, it would be difficult to prune them. In that case, remove big, fallen branches of neighboring trees and rocks (if any) lying at the base of the vines, set your lawn mower to its highest setting, and run it over the plants. Rake the debris away and dispose of it properly.

➺ Once established, it is difficult to get rid of the creeping myrtle. The plant is extremely invasive, and it can smother everything in its path. So, the growth should be controlled promptly and properly.

➺ Hard pruning (or mowing) should be followed by an application of glyphosate-based herbicide on new growth. Leaves should be covered thoroughly with triclopyr or glyphosate mixed according to label instructions with a non-ionic surfactant. You may have to treat the plants every year.

➺ To remove the underground portions, the plants can be pulled by hand, dug up, or raked up.

How to Propagate Creeping Myrtle

➺ By dividing the root balls. Divide them in early spring or mid- or late autumn. This is the easiest method of propagation.
➺ From softwood cuttings
➺ From seeds
➺ By simple layering

Leafhoppers, scale insects, aphids, etc. may attack the plants. Stem blight is considered as a serious disease of V. Minor. A fungus called Phoma exigua var. exigua grows in moist soil and plant debris. The fungal infection results in dark brown to black lesions on the stems. The affected stems and their foliage turn black or brown. The fungus girdles a stem at its base and eventually the stem dies. The newly growing stems may also die. The disease can be difficult to control. It is necessary to apply fungicides at the very onset of the symptoms. You may use Thiophanate-methyl (Bonide Bonomyl, Dragon 3336, or Ferti-lome Halt), Copper sulfate pentahydrate (Phyton 27), or Mancozeb (Bonide Mancozeb or Dragon Mancozeb). You should strictly follow the instructions on the labels.

Apart from adding beauty and texture to your garden, creeping myrtle can smother the weeds and can thus help in weed control. You can also use it for control of erosion on sloped areas. It is a fast-growing low- or no-maintenance plant. 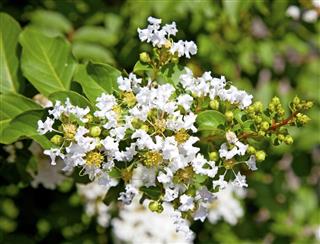 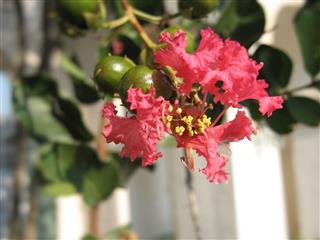 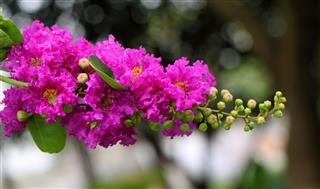